Peter F. Drucker was a writer, professor, management consultant and self-described “social ecologist,” who explored the way human beings organize themselves and interact much the way an ecologist would observe and analyze the biological world. Hailed by BusinessWeek as “the man who invented management,” Drucker directly influenced a huge number of leaders from a wide range of organizations across all sectors of society. Among the many: General Electric, IBM, Intel, Procter & Gamble, Girl Scouts of the USA, The Salvation Army, Red Cross, United Farm Workers and several presidential administrations. Drucker’s 39 books, along with his countless scholarly and popular articles, predicted many of the major developments of the late 20th century, including privatization and decentralization, the rise of Japan to economic world power, the decisive importance of marketing and innovation, and the emergence of the information society with its necessity of lifelong learning. In the late 1950s, Drucker coined the term “knowledge worker,” and he spent the rest of his life examining an age in which an unprecedented number of people use their brains more than their backs. Throughout his work, Drucker called for a healthy balance—between short-term needs and long-term sustainability; between profitability and other obligations; between the specific mission of individual organizations and the common good; between freedom and responsibility. Drucker’s first major work, The End of Economic Man, was published in 1939. After reading it, Winston Churchill described Drucker as “one of those writers to whom almost anything can be forgiven because he not only has a mind of his own, but has the gift of starting other minds along a stimulating line of thought.” Driven by an insatiable curiosity about the world around him—and a deep desire to make that world a better place—Drucker continued to write long after most others would have put away their pens. The result was a ceaseless procession of landmarks and classics: Concept of the Corporation in 1946, The Practice of Management in 1954, The Effective Executive in 1967, Management: Tasks, Responsibilities, Practices in 1973, Innovation and Entrepreneurship in 1985, Post-Capitalist Society in 1993, Management Challenges for the 21st Century in 1999. Drucker, who had taught at Sarah Lawrence College, Bennington College, and New York University, spent the last 30-plus years of his career on the faculty at Claremont Graduate University. In 2002, he received the Presidential Medal of Freedom, the nation’s highest civilian honor. Drucker died in November 2005, just shy of his 96th birthday. Today, his legacy is being advanced by the Drucker Institute, whose purpose is to strengthen society by igniting effective, responsible and joyful management. Learn more about Peter Drucker and the work of the Drucker Institute at www.druckerinstitute.com. View this collection on the contributor's website.
View collection guide. 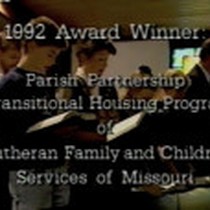 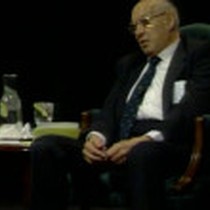 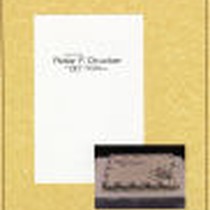 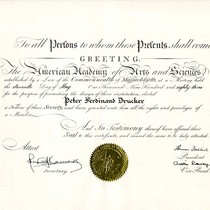 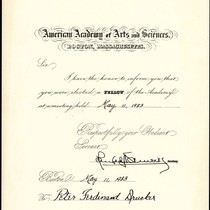