Richard Cross (1950–1983) earned a degree in magazine journalism from Northwestern University in 1972. After he finished college, he began his career as a photographer at the Daily Globe in Worthington, Minnesota, where he worked until 1973. Cross spent four years (1974–1978) as a volunteer in Bogotá, Colombia, working as a photographer and audio-visual consultant for the Peace Corp’s Agricultural Communications program. Colombian anthropologist Nina de Friedemann invited him to join a project she had started in the early 1970s documenting what is considered the first Palenque (community of free Black slaves) in the Americas, Palenque de San Basilio, near Cartagena, Colombia. The collaboration of Friedemann and Cross resulted in their 1979 book, Ma Ngombe: guerreros y ganaderos en Palenque (1979), which includes 260 photographs by Cross. In 1979, he was drawn north to document the wars raging in Nicaragua, El Salvador, Honduras, and Guatemala, as well as the refugee crisis in Southern Mexico. There, Cross freelanced for major news outlets including U.S. News and World Report, Newsweek, and the Associated Press, and was nominated for a Pulitzer Prize for his work in Nicaragua. A selection of 76 photos was published in a 1982 book co-authored with Nicaraguan poet Ernesto Cardenal, Nicaragua: la guerra de liberación (1982). Cross pursued graduate work in visual anthropology at Temple University in Philadelphia. As part of his graduate work with Dr. Peter Rigby and fellow graduate student Peter Biella, he traveled in the summer of 1980 to central Tanzania, where he and Biella took thousands of photographs of the Ilparayuko Massai people for an ethnographic film, Maasai Solutions, where still photographs were used with a synchronous soundtrack. Biella and Cross later published a limited-edition book, Maasai Solutions: A Film About East African Dispute and Settlement (1981). Cross was killed in a car struck by a land mine in Honduras on June 21, 1983, along with Los Angeles Times reporter Dial Torgerson. Cross was 33 years old. | Warning: Contains graphic images View this collection on the contributor's website.

1 item found in this collection of 1410 items 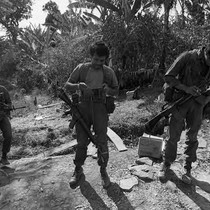