For more than 40,000 years, humans have been inspired to create what archeologists call “rock art”: paintings and engravings on natural stone surfaces.
Read full overview|Go to first item 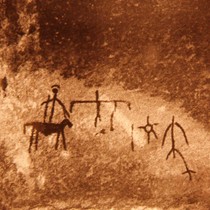 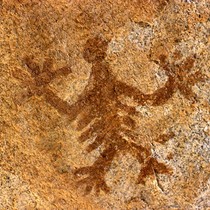 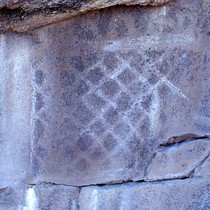 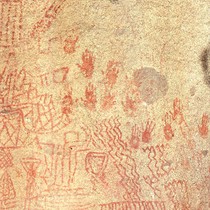 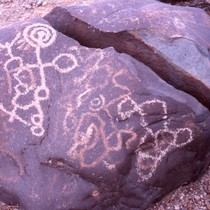 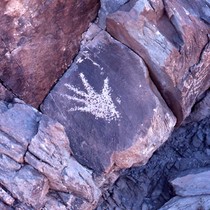 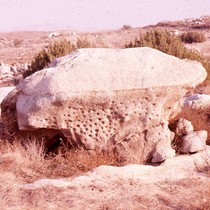 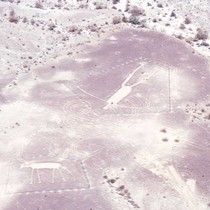 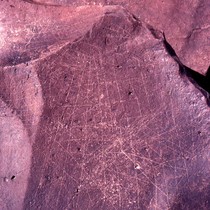 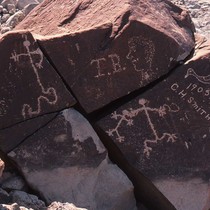 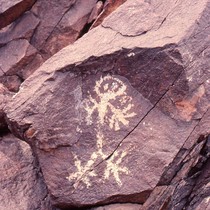 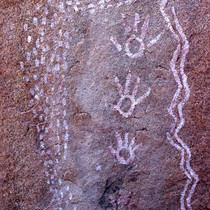 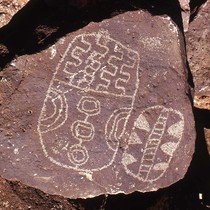 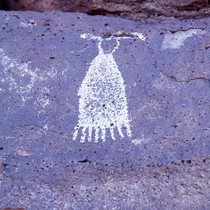 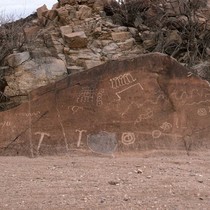 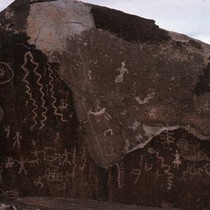 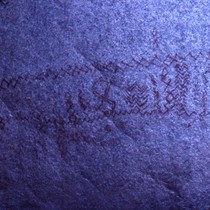 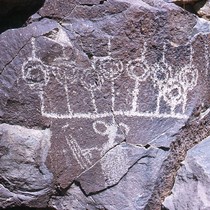 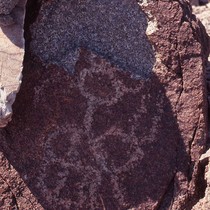 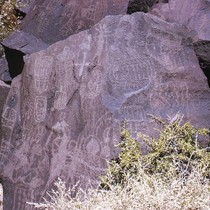 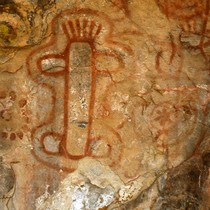 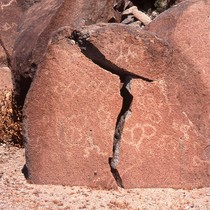 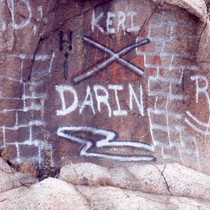 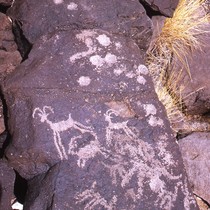 The photographs in this collection depict rock art sites throughout central and southern California. The aboriginal peoples who created this artwork have a very long history in the region. In North America, specifically in California and the surrounding region, archaeological evidence suggests that settlement began in the Paleoindian period (approximately 12,000-8,000 YBP, or “years before present”), with the greatest use of the area occurring 2,600 to 1,000 YBP.

It is difficult to know when the sites in these particular images were created, because currently there are few techniques for dating rock art. Generally speaking, rock paintings in unprotected environments (like boulder faces) are thought to be less than 500 years old because they are exposed to wind and rain. But carved designs in hard rock like granite are durable and can last for thousands of years in a stable environment.

Native American rock art provides us with many clues in our search for the history of California’s aboriginal peoples. The painted or carved symbols are not writing, as we know it, but they were created to convey information. Their meanings are not always known, and are sometimes debated among scholars.

Rock art can range from simple scratch marks to elaborate motifs. Some common abstract design elements include circles, concentric circles, spirals, dots, and meandering lines. Representative designs include human forms and animals. Human forms with horns or radiating wavy lines and animals such as the lizard and rattlesnake are thought to be symbols of power or spirit helpers. This image is thought to be a representation of a medicine bag, and this one clearly resembles a human hand.

Ethnographic information has suggested that rock art served several functions. Some rock art styles could be boundary markers for clan territories or guides to water and food resources. Others, like this example, may record historical events such as astronomical phenomena or the arrival of Spanish explorers. It has been determined that some rock paintings were made as part of girls’ puberty ceremonies; designs most commonly thought to be related include red diamond chains and chevrons. Some rock art motifs resemble the visionary imagery of trance states, which Native American shamans entered to communicate with the spirit world.

Rock art is characterized by how it was created and the materials that comprise it. Major types include the following.

Petroglyphs are rock engravings produced by pecking (striking the surface of the rock with a harder small stone), chiseling (using a hammer stone to pound a sharp stone chisel), abraiding (rubbing or battering the rock surface with a rounded stone), or scratching (using a very sharp edged stone to scratch finer lines).

“Desert varnish,” a reddish brown or black mineral patina that forms on rock surfaces in the desert, creates a perfect medium for petroglyphs. Designs such as this one were etched through the patina to reveal the lighter rock beneath. Desert varnish forms very slowly—1,000 years for a heavy varnish—and becomes thicker and darker with increasing age.

Cupules, a type of petroglyph, are small, cup-shaped indentations. They are pecked or ground into the stone and appear randomly or sometimes in lines or groups.

Pictographs are designs painted on rock surfaces with paints made from natural mineral pigments mixed with animal fats, egg whites, plant oils, or urine to bind them. Hematite (iron oxide) was used for red paints, limonite for yellow, kaolin clays for white, and charcoal for black. Paints were applied with brushes made from yucca fiber or applied with fingers and hands. The most common color in southern California is red.

Geoglyphs, also known as intaglios, are giant drawings on the ground that depict geometric designs, human forms, and animal figures. These large designs were created by clearing the dark rock of desert pavements and exposing the lighter colored rock and sand below. Many of these figures were made over the last 2,000 years. More than 200 geoglyphs have been discovered along the Colorado River, and many others have been reported around the world.

Natural elements such as rain, wind, heat, and cold have had their effect on Native American rock art. Pigments have worn away and mineralization has re-patinated surfaces, rendering the images ever fainter. Heat and cold have caused crumbling and exfoliation while falling rocks have broken away designs from their original locations. Plants taking root in cracks, lichen growth, and mosses covering surfaces eventually break down rock and its images. This image shows a rock—and, as a result, a design—that has broken apart due to natural deterioration. Nevertheless, it is remarkable how well many of the symbols and designs made thousands of years ago have survived.

While the effects of nature on rock art images are sad to see and result in great cultural loss, nothing is as devastating as the damage done by humans. This destruction takes many forms; sometimes it is inadvertent but often it is intentional. Many images have survived wind, rain, and storms for thousands of years only to fall victim to vandalism. For example, graffiti and bullet holes obfuscate and can potentially destroy a design. Because they are located on large swaths of ground, geoglyphs have also been negatively impacted by illegal motorcycles, SUVs, and off-highway vehicle activities.

YBP: “Years Before Present.” Scientists use this time scale to refer to events that happened in the past. This age scale is based on the reliable and consistent use of radiocarbon dating in the 1950s. Since time is constantly changing, YBP is counted from the year 1950.

Ethnography: the study and systematic recording of human cultures. Much of what we know about rock art has come from listening to the people whose ancestors created it.

Shaman: a person believed to communicate with the spirit world in order to divine future events or heal the sick.

"Native Americans: Rock Art in California" was curated and written by the Agua Caliente Cultural Museum and the University of California in 2011.