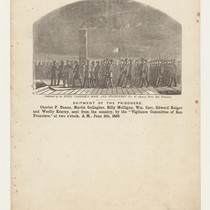 Shipment of the prisoners... by the Vigilance Committee of San Francisco [California] at two o'clock A.M. June 5th, 1856 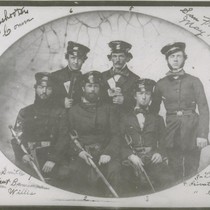 Sharpshooters of the Vigilante Committee. May 15, 1856 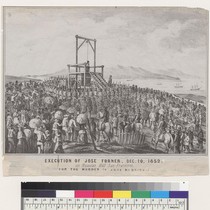 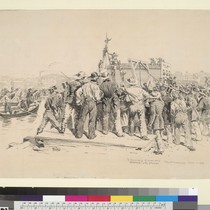 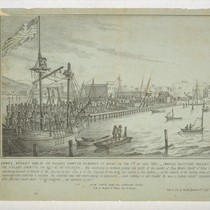 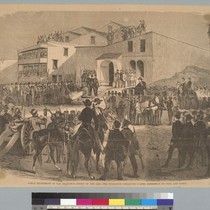 Great excitement in San Francisco [California], front of the jail, the Vigilance Committee taking possession of Cora and Casey 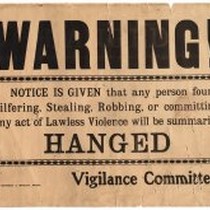 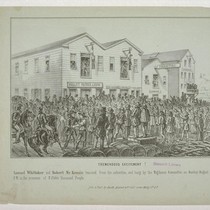 Tremendous Excitement! Samuel Whittaker and Robert McKenzie rescued from the authorities, and hung by the Vigilance Committee, on Sunday August 24th at 3 o'clock P.M. in the presence of Fifteen Thousand People 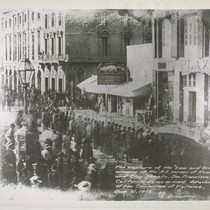 Jenny Lind Theatre; capture of the Law and Order Armory by armed attack of the Vigilante Committee. June 21, 1856

Executions of Casey & Cora, by the San Francisco Vigilance Committee May 22nd, 1856 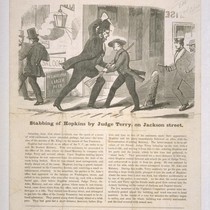 Stabbing of Hopkins by Judge Terry, on Jackson Street 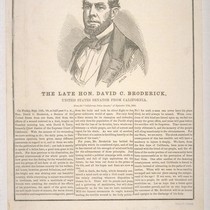 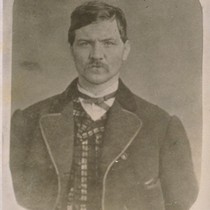 John Devine, alias "Chicken Devine", was considered a desperate criminal. He always hung out around the Barbary Coast and the 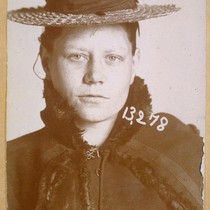 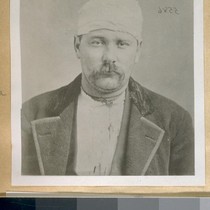 George Walker alias McDermott was arrested in this city March 16th, 1880, with James McCaul, No. 3188, and George Lupton 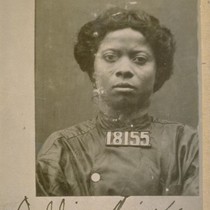 Dolly Mickey--one of the old Barbary Coast negro pickpockets. She would not stop at murder to get her victim's money. After a number of arrests she was finally sent to the County Jail for six months. In March, 1906 she left town 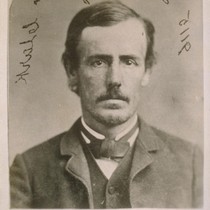 James Egan. Born in Russell Street between Hyde and Larkin Streets; attended Spring Valley School on Broadway between Larkin and 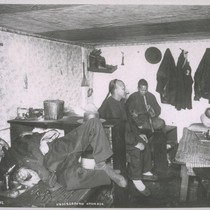 Opium Den underground, by Flash-light. Smoker caught lighting his pipe. The keeper in the door had extinguished the lights 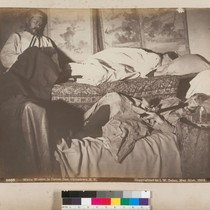 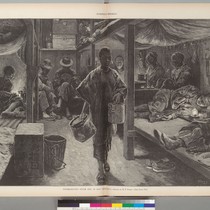 These images of crime, revenge, and drug dens show why California was often called part of the "Wild West." With few actual law officers or courts to enforce the law, many people took it upon themselves to impose their own varying ideas of justice.

The Gold Rush era was marked by lawlessness: duels, murders in broad daylight, public hangings, jail breakouts, and vigilantism were everyday occurrences. The images in this group are a vivid record of those times. Included here are photographs of convicted murderers like James Egan, who was sent to San Quentin for 35 years for killing a man in a saloon brawl; and John "Chicken" Devine, who beat a man to death with a rock. A newspaper article reports that former Chief Justice of the Supreme Court of California David. S. Terry killed US Senator David C. Broderick in a duel, and a half-page drawing depicts the crime. Men weren't the only criminals: pickpockets Jennie Hastings and Dolly Mickey are also represented here.

Law officers were in short supply, and laws were not uniformly enforced. Some men — such as those in the photograph "Sharpshooters of the Vigilante Committee" — took the law into their own hands, enforcing "justice" as they saw fit. They posted public notices like the "Warning!" sign, which threatens hanging as retribution for "pilfering, robbing, stealing, or any act of lawless violence." Several images portray individuals "rescued from the authorities" and hanged — before being tried or even given a hearing for the crimes of which they were accused.

Drugs were also part of Gold Rush communities. As several images show, people sometimes smoked opium in underground opium dens. And, as one photograph makes clear, opium smoking crossed racial and cultural boundaries. Eventually, law-abiding citizens grew weary of the uncontrolled murder and mayhem in their rapidly growing communities. As the Gold Rush era drew to an end, people felt that existing legal and judicial institutions had to be strengthened.

"Murder and Mayhem in the Gold Rush Era" was curated and written by the University of California in 2005.