These photographs in this exhibition show some of the everyday people in mid-1800s California, as well as the shops, saloons, and other establishments that served them.
Read full overview|Go to first item 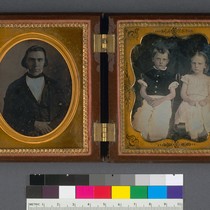 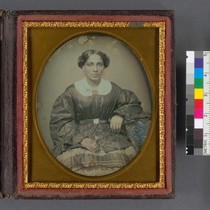 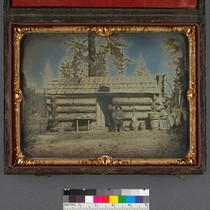 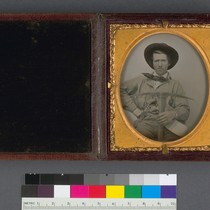 [Joseph Sharp, with a pick axe, pan and gun.] 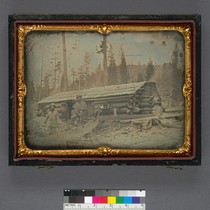 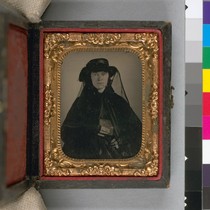 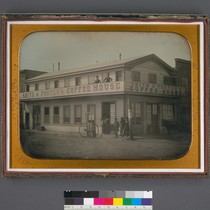 [Smith and Porter's coffee house and hotel on the corner of Sansome and Sacramento Streets, San Francisco.] 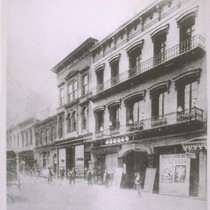 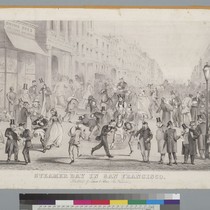 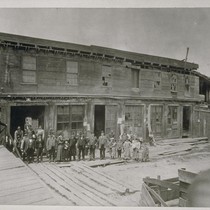 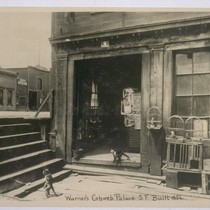 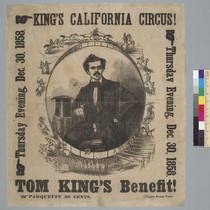 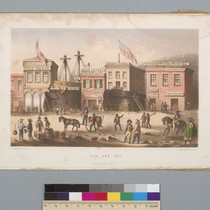 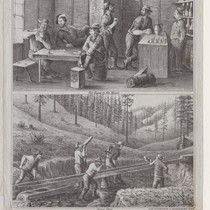 Bar room in the mines/Long Tom 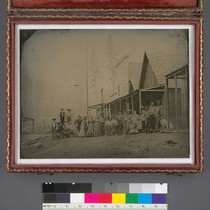 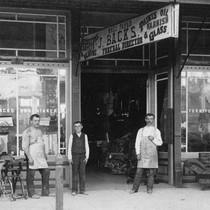 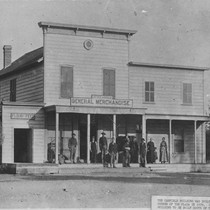 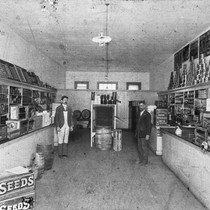 The images in this group offer a glimpse of daily life in California during the mid-1800s in big cities like San Francisco and in smaller, rural towns like Dixon and Nevada City. These photographs show some of the everyday people of the time, as well as the shops, saloons, and other establishments that served them.

Many people who came to California to strike it rich eventually abandoned their dreams of gold. They stayed in California and worked as farmers or merchants, relaxing in saloons or coffee houses and marrying and raising families. This group contains several portraits captured in Daguerreotypes and cased photographs that depict a variety of everyday people: a young Gold Rush widow in black mourning attire; a gold seeker with a pick axe, a pan, and a gun; and a farmer and wagon maker (who founded the town of Dixon in 1852), alongside images of his two children.

The daily needs of people during the Gold Rush were much like ours today. Photographs of buildings shown here include a furniture store, a mortuary, a general merchandise store, and a grocery.

The mining industry and the growing population triggered a need for timber. As one lithograph illustrates, abandoned wooden ships that would otherwise be left in the bay were pulled ashore and turned into stores and buildings in San Francisco. In rural areas and mining towns, buildings were often constructed of unfinished logs, like the Coyote and Deer Creek Water Co. office near Nevada City.

In their leisure time some people frequented coffee houses or saloons. There was even a barroom in at least one gold mine, as one lithograph shows. The photograph of Abe Warner’s Cobweb Palace in San Francisco — a saloon that was formerly a butcher shop — shows monkeys and parrots roaming freely. And when people wanted other kinds of entertainment, they could attend Maguire’s Opera House in San Francisco or — for just 38 cents — spend the afternoon at King's California Circus.

Daguerreotype: one-of-a-kind image created on silver-plated copper. Daguerreotypes are named for their creator, the French commercial artist Louis Jacques Mande Daguerre, who discovered the process in 1837.

Cased photograph: a daguerreotype presented in a miniature framed case.

Lithograph: a print made from a drawing on a stone or metal plate. Lithographs were a popular form of newspaper illustration in the 19th century.

"Everyday Life and People in the Gold Rush Era" was curated and written by the University of California in 2009.