The Gold Rush had an effect on California's landscape. Rivers were dammed or became clogged with sediment, forests were logged to provide needed timber, and the land was torn up — all in pursuit of gold.
Read full overview|Go to first item 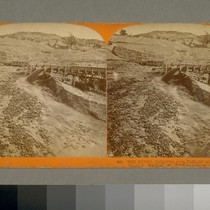 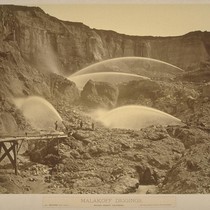 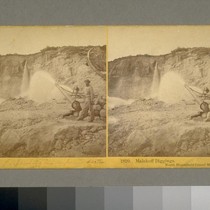 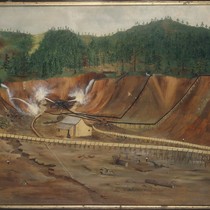 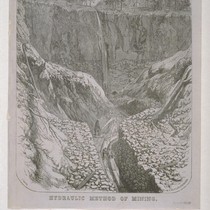 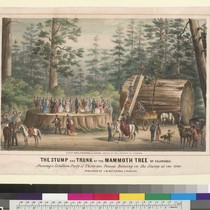 The stump and trunk of the Mammoth Tree of Calaveras [County, California] 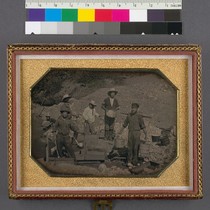 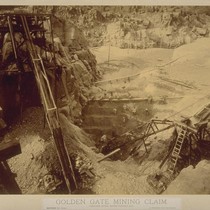 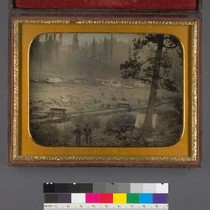 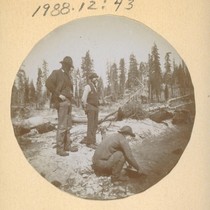 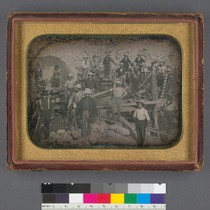 [Portrait of 23 miners at sluice] (Detail - image side only.) 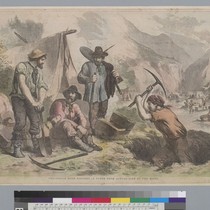 California gold diggers, a scene from actual life at the mines 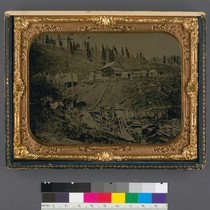 [Mines at Forest City, in gully below main street, with miners pausing near trestles, and ore carts.] 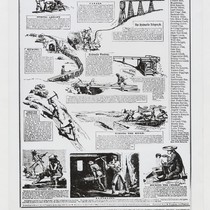 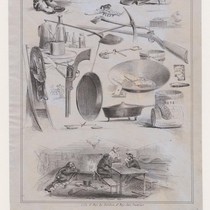 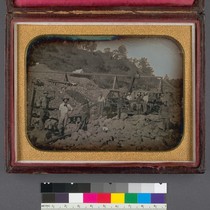 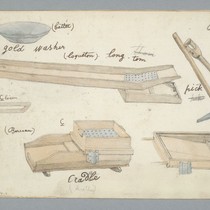 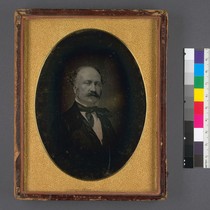 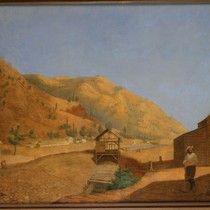 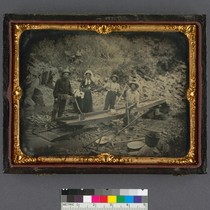 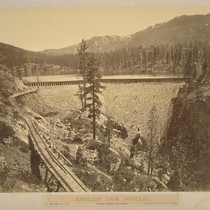 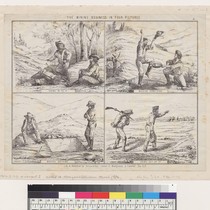 The mining business in four pictures
View all

The images in this group show mines, miners at work, and the tools they used. They also illustrate the effect of the mines and the mining industry on California's landscape. Rivers were dammed or became clogged with sediment, forests were logged to provide needed timber, and the land was torn up — all in pursuit of gold.

The Gold Rush, positive for California in so many ways, had a devastating effect on the state's environment. Many of these problems were directly related to gold-mining technology. The process of hydraulic mining, which became popular in the 1850s, caused irreparable environmental destruction. Two images show California's largest hydraulic mine — Malakoff Diggings, in Nevada County — in action. (Malakoff Diggings is now a state park and open to visitors.)

Dams (such as the English Dam in Nevada County, shown in one photograph), which were constructed to help supply water to the mines during the dry summer months, changed the course of rivers. The sediment washed away by hydraulic mining clogged riverbeds and lakes, threatening agriculture throughout the Central Valley. Conflicts over water arose between mining and farming interests. Hydraulic mining essentially came to an end in 1884 with the Sawyer Decision, legislation passed to resolve this conflict.

The mining industry also needed a great deal of wood, both to fuel the boilers at the mines and to build extensive canal systems. This demand for lumber helped create the logging industry. California's forests had plenty of trees to log, many quite large. The lithograph "The Stump and Trunk of the Mammoth Tree of Calaveras" depicts a society ball at which 32 people danced on the stump of a giant sequoia tree.

Photographer Carleton E. Watkins was well known for his images of the grand views of the West. He was the first to capture Yosemite on film, and helped shape how people throughout the country and the world viewed California. He took many of the broad landscape photos in this group. Watkins also made use of the new technology of the day to create stereoscopic views, including the image of the Malakoff Diggings.

There are also several Daguerreotypes in this topic. They include a portrait of John A. Sutter (at whose mill gold was first discovered); miners at work; miners with equipment; and general scenes of mining operations.

Lithograph: a print made from a drawing on a stone or metal plate. Lithographs were a popular form of newspaper illustration in the 19th century.

Daguerreotype: one-of-a-kind image created on silver-plated copper. Daguerreotypes are named for their creator, the French commercial artist Louis Jacques Mande Daguerre, who discovered the process in 1837.

Stereoscopic views: a new form of entertainment in the mid-1800s. These photographs of people and places, which appeared three-dimensional when viewed, offered viewers a way to "travel" without leaving home. The technology is fairly simple: two nearly identical photos offering slightly different views of the same scene are printed next to each other on a card. When seen through a stereo viewer (a simple handheld device), they create a 3D effect.

"Environmental Impact in the Gold Rush Era" was curated and written by the University of California in 2005.