The Growth of Cities

These images record the rapid growth of small settlements into big cities as people continued to come to California from all over the world.
Read full overview|Go to first item 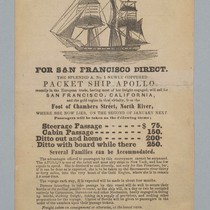 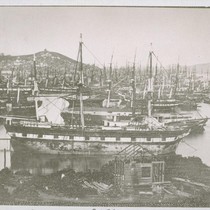 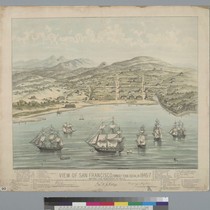 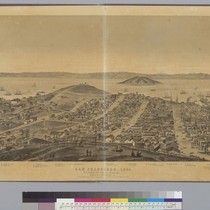 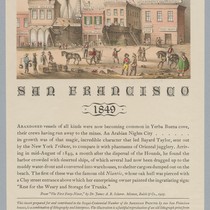 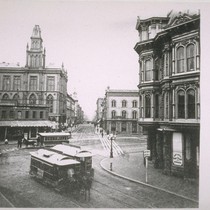 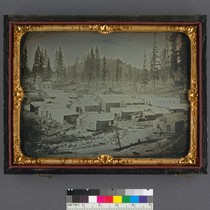 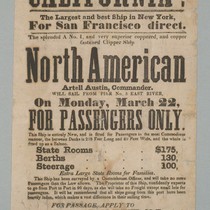 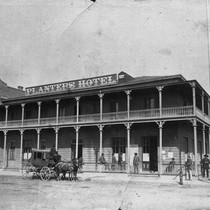 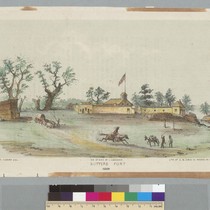 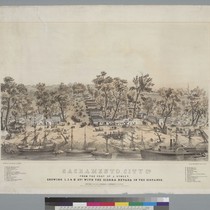 Sacramento City, Ca[lifornia] from the foot of J. Street

The Farmers Union in the A. Pfister & Co. Building 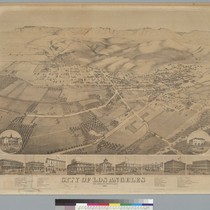 These images record the rapid growth of small settlements into big cities as people continued to come to California from all over the world. Aerial views show spreading cities, and photographs depict the substantial hotels, stores, and other businesses that served the steady influx of new Californians.

Cities up and down the state of California grew rapidly during the Gold Rush era. Some of these cities were veritable boomtowns: San Francisco, a small village in 1847, was a bustling city by 1849, just two years later. San Francisco's population boom even had an impact on its geography. One image from 1847 shows Montgomery Street on the waterfront; but a photograph taken in 1862 shows that the waterfront had been filled to increase the city's real estate, pushing Montgomery Street inland.

Southern California also had its share of rapidly growing cities. Between 1850 and 1870, a span of just 20 years, the population of Los Angeles County grew from 3,530 and 15,309. Lithographs show a bird's eye view of the city and outlying farmland, a vastly different city than the Los Angeles of today. Two photographs of substantial buildings taken in Anaheim in the 1880s — one of a hotel — show clear evidence of growth.

The cities continued to grow because more and more people migrated to California, despite the long and difficult journey. Many transportation businesses encouraged travel to California, and posters advertising travel fares reflected the different ways that people could travel to and within the Golden State: by ship, by train, or in a horse-drawn stagecoach. Some ads even played to travelers' fears, suggesting that crossing by land was safer than by sea.

"The Growth of Cities in the Gold Rush Era" was curated and written by the University of California in 2005.