The transcontinental railroad connected the east and west coasts of the United States with a single rail line. This had a profound impact on the nation as a whole, and on California—the end of the line—in particular.
Read full overview|Go to first item 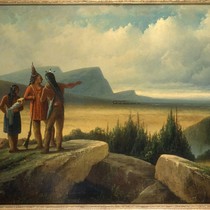 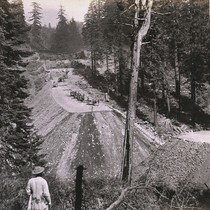 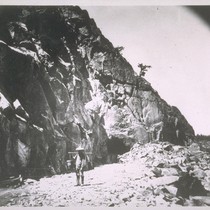 ["Heading (top cut) of East Portal, Tunnel No. 8." Unidentified Chinese man working on construction of the Central Pacific Railroad in the Sierra Nevada mountains, near Donner Lake.] [Copy photograph of Alfred. A. Hart's C.P.R.R. stereograph no. 204.] 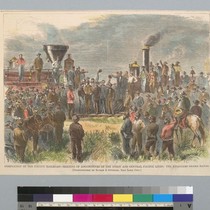 Completion of the Pacific Railroad: meeting of the Union and Central Pacific Lines... [Promontory Point, Utah] 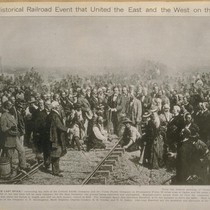 The Historical Railroad Event that United the East and West on this Continent. "Driving the last Spike" connecting the rails of the Central Pacific Company and the Union Pacific Company at Promontory Point, 80 miles west of Ogden and 804 miles east of San Francisco, May 10, 1869 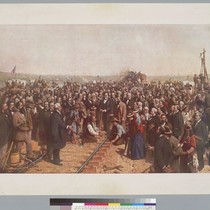 [Ceremony to drive the golden spike at Promontory Point, Utah, 1869] 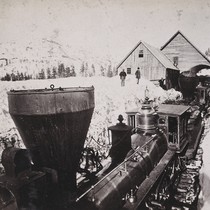 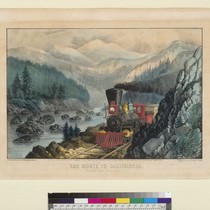 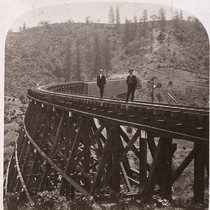 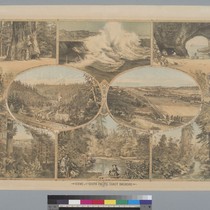 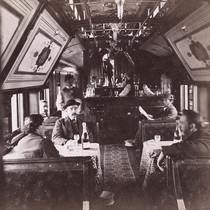 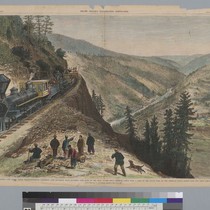 Across the continent: the Frank Leslie transcontinental excursion 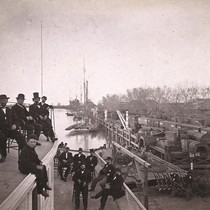 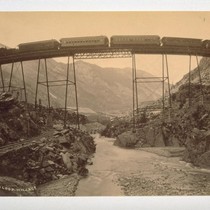 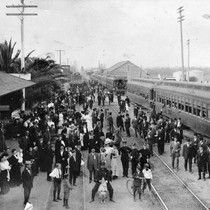 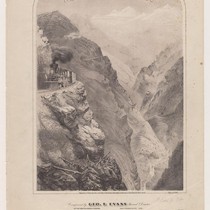 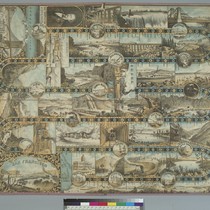 [Railroads between New York and San Francisco, California, with scenes on the way (boardgame?)]
View all

The transcontinental railroad connected the east and west coasts of the United States with a single rail line. This had a profound impact on the nation as a whole, and on California — the end of the line — in particular. The images in this group show different aspects of the railroad, including workers, travelers, tracks, railroad bridges, and trains.

Work on the railroad was physically difficult and at times dangerous, and attracting workers was a challenge. The majority of the Central Pacific's laborers were Chinese. A Chinese worker is shown in the image "Heading (top cut) of East Portal, Tunnel No. 8." Both railroad companies actively recruited Chinese laborers because they were regarded as hard workers and were willing to accept a lower wage than white workers, mostly Irish immigrants.

As construction progressed, the Central Pacific and the Union Pacific competed to see which could lay the most track each day. The meeting of the two sets of tracks — the "gold spike" ceremony — took place on May 10, 1869. Several photographs and drawings depict this historic moment.

Now the country was connected as never before: a journey between San Francisco and New York that previously took up to six months now took only days. The photograph "High Bridge in Loop," from Views from a Trip to California, shows a train passing quickly through a mountain pass. The transcontinental railroad allowed people to travel more, farther, and in pleasant conditions, as reflected in the photograph "Commissary Car, 'Elkhorn Club.'" The photograph "Knights of Pythias at the Santa Fe Railway Station, Anaheim" shows an example of the popularity of trains.

Even as the transcontinental railroad brought the new country together, it brought change to the world of Native Americans. The tracks ran through a number of tribal territories, bringing into conflict cultures that held very different views of the land and how it might be used and lived on. The painting The First Train, by Herbert Schuyler, depicts three Indians pointing past their encampment at a train in the far distance. The railroad also brought an increasing number of European Americans west. One consequence of this influx was the depletion of the buffalo herds, a major food source for Plains Indians. European Americans would often shoot buffalo for sport from the train; by 1880, the buffalo were mostly gone and Plains Indians had been gathered onto reservations. Millions of acres of open grassland were being settled by the people moving west. Eventually, much of this land became the farmland that fed a growing nation.

The transcontinental railroad opened up the West to the rest of the country, even if they never made the trip themselves. A Currier & Ives hand-colored lithograph depicts a train running along the Truckee River in Northern California. The San Francisco publishing firm of Lawrence & Houseworth hired photographers and published photographic tourist catalogs containing views of the West, which they sold commercially. The railroad took hold in popular culture, as shown by sheet music for the song "New Express Galop [sic]." There was even a railroad board game illustrating "Railroads Between New York and San Francisco, California, with Scenes on the Way."

"The Transcontinental Railroad" was curated and written by the University of California in 2005.