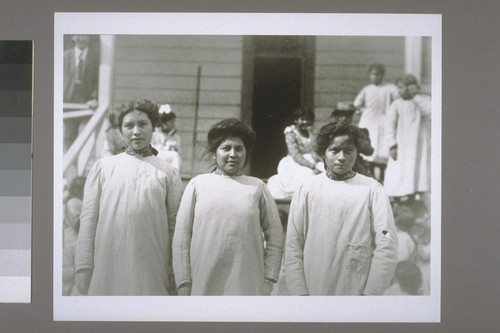 As tribal lands and structures disappeared or were taken away, many aspects of Native Americans' lives changed.
Read full overview|Go to first item 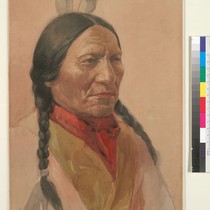 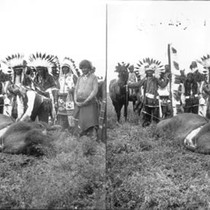 Geranimo, The Famous Apache Chief, Skinning the Buffalo After the Hunt, Oklahoma 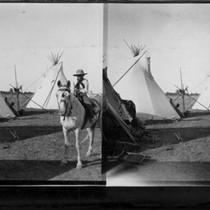 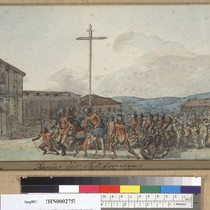 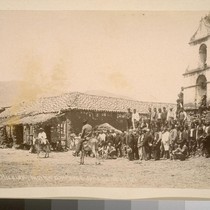 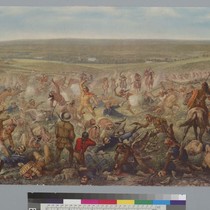 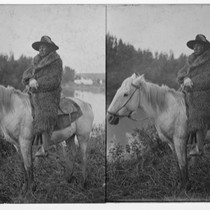 "Curley" a Crow Indian. the only man who escaped at the Custer Massacre.--- Crow Agency. Montana, 1912. He has on a Buffalo overcoat 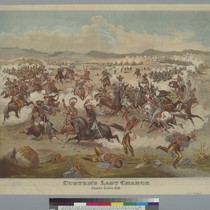 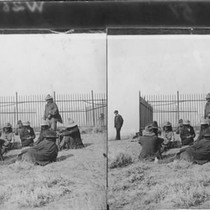 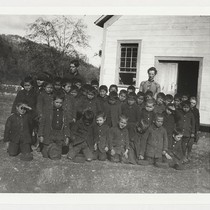 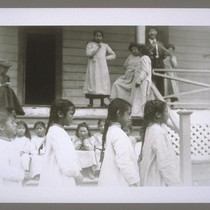 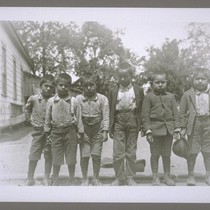 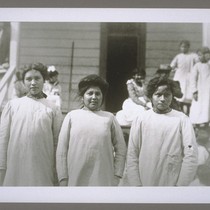 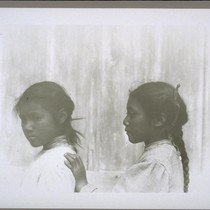 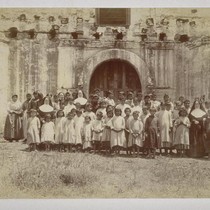 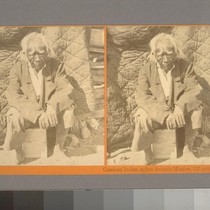 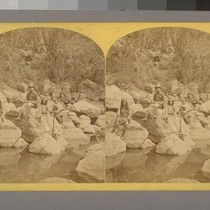 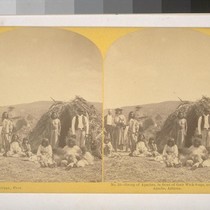 Group of Apaches, in front of the Wick-8-ups [sic], near Camp Apache, Arizona 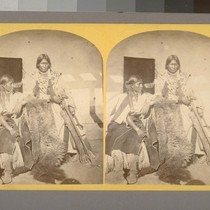 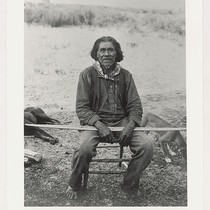 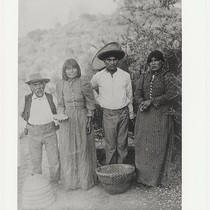 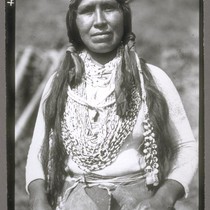 The images in this topic reflect the dissolution of tribal structure that occurred over the course of the 19th century. As traditional Native American lands disappeared or were taken away, many aspects of their daily lives changed, including housing, clothing, food sources, livelihood, and religion.

Beginning in the 1700s, the Spaniards built the California Missions to make contact with Native Americans in the hope of converting them to Christianity. One painting by a Russian artist depicts a group of Native Americans dancing in front of Mission Dolores in San Francisco; a later photograph shows a group of nuns with westernized native children in front of the Pala Mission in Southern California.

As European Americans continued to migrate West throughout the 1800s, they came into conflict with the native peoples who lived there. Native Americans were increasingly pushed off their lands and forced onto reservations. At the same time, whites pressured Native Americans to assimilate. Native American children were sent away to boarding schools with the goal of socializing them and teaching them “white ways.” Several photographs depict young Native American children wearing western dress in boarding school settings. Some of the photographs taken in the mid-1800s show Native Americans wearing traditional clothing (including "Jicarilla Apache Brave and Squaw, lately wedded," "Coyotero Apache Scouts," and "Group of Apaches, in front of the Wick-8-ups [sic]"). Photographs taken at the turn of the 20th century, such as "Pummuke" and "Chief Chepah, his wife, son, and daughter-in-law," indicate that by then even older Native Americans were adopting Western dress.

Several photographs in this topic are from government-sponsored survey expeditions launched in the early 1870s to chart western lands and native peoples. These expeditions coincided with the beginning of anthropology as a science. In 1879, Congress created the Bureau of Ethnology to study and document the native people and their cultures. Included here are three portraits taken for these ethnographic field studies, and a painting of Sitting Bull, the famous Sioux medicine chief.

Native Americans clashed violently and repeatedly with the white European Americans moving into their territory. The whites wanted to push the Indians off their land and onto reservations, but the Indians often refused to go. The Lakota branch of the Sioux tribe was one such group, and in 1875 their refusal resulted in the Lakota War. A famous battle in the Lakota War took place at the Little Bighorn River in Montana in 1876; there, US forces under General George Armstrong Custer attacked Crazy Horse and hundreds of Lakota and Northern Cheyenne warriors. In the battle, which came to be known as Custer's Last Stand, Custer's men were outnumbered four to one and every white man was killed. A drawing and a color lithograph show versions of this battle. Some Crow served as scouts for General Custer in the 7th Cavalry. One stereoscopic view shows "Curley" — the only Indian survivor fighting on Custer's side — wearing a buffalo coat and sitting astride a horse.

"Native Americans and Contact" was curated and written by the University of California in 2005.