The 20th century ushered in a change from handcrafting to machine tooling and mass production. It was a time of rapid industrialization.
Read full overview|Go to first item 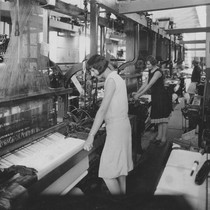 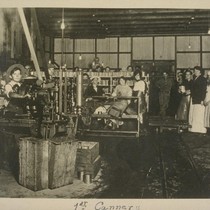 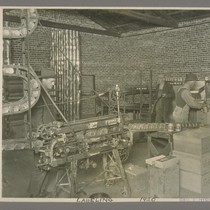 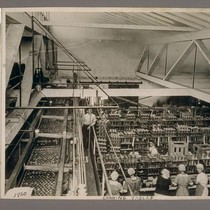 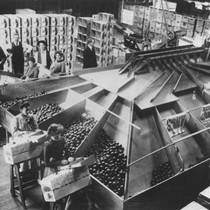 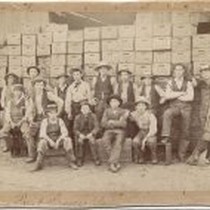 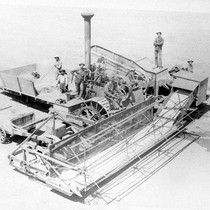 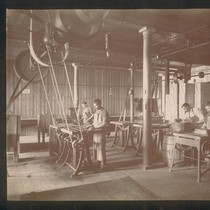 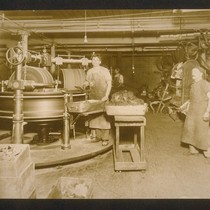 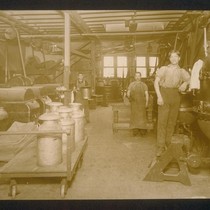 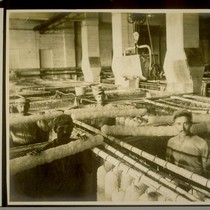 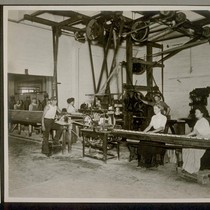 Soap Wrapping Room, Bayonne Refinery, showing automatic machine for wrapping soap. This machine wraps 115 cakes a minute. The girls place the soap in cases which are afterwards nailed up and sent down in the elevator in the background to the Shipping Room below 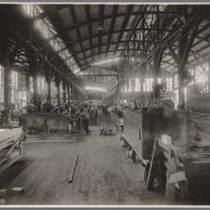 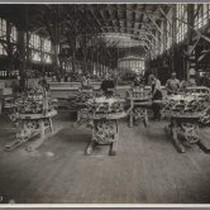 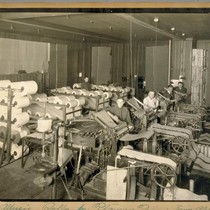 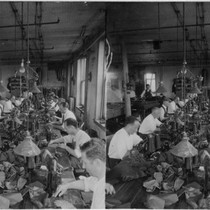 Making men's clothes (sewing machines) this shop is rather much improved type of sweatshop in N.Y. City. These clothes alltho' cut by machine are good clothes retailed at 40.00 and 50.00 a suit 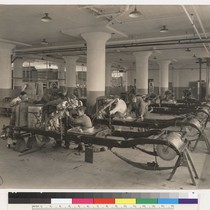 Doble factory with workers and chassis
View all

The early 20th century was a time of rapid industrialization and the widespread adoption of mass production. These images show the importance of machinery in the workplace, and how people worked in assembly lines.

The 20th century ushered in a change from handcrafting to machine tooling. Henry Ford introduced one of the first moving assembly lines as a way to turn out more cars more quickly, and the emerging auto industry popularized this mode. A photo of the Doble Steam Motors Corporation factory shows a line of workers and car chassis in production. This new technology, and the spread of industrialization, changed forever the way that work was completed.

A wide variety of industries all across the country converted to mechanization, and California was no exception. One 1929 image shows young women working in a towel factory in Orange. Photographs taken in San Francisco illustrate that workers used machines to make products as different as Ghirardelli Chocolate and music rolls for automated player pianos. Images also show women working on an assembly line in a soap factory, and men sewing clothes in a shop (at a time when a good suit, cut on machines instead of by hand, retailed for $40 to $50).

Automation and mechanization also changed agricultural practices. The combined traction steam harvester built by Stockton J. Barry on his California ranch was one of the machines that changed the way produce was harvested. Mechanized canning changed the way fruit and vegetables were processed and preserved, and made out-of-season produce available year round. Photographs in this group show cannery workers at tables, and cans going through a labeling machine. The introduction of mechanized food processing eventually brought a new awareness of the importance of standards for foods production. The Pure Food and Drug Act and the Meat Inspection Act were both passed in 1906

"The Changing Workplace in Early 20th Century California" was curated and written by the University of California in 2005.