More than 200 different native tribes — about 300,000 people — once made up the population of the land that is today the state of California.
Read full overview|Go to first item 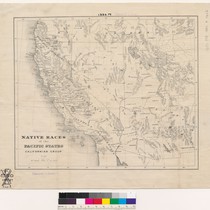 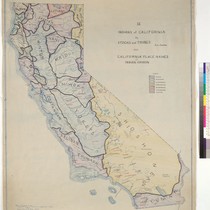 Indians of California by stocks and tribes : and California place names of Indian origon[sic] / [by?] A.L. Kroeber ; [drawn? by] R.L.B 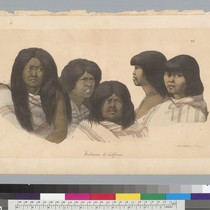 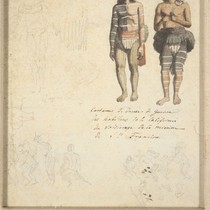 [War dance costumes of the inhabitants of California] 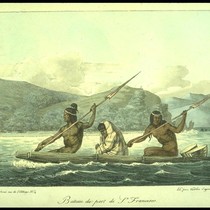 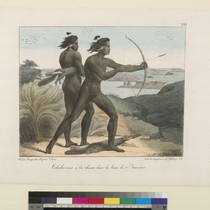 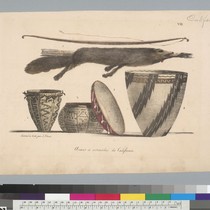 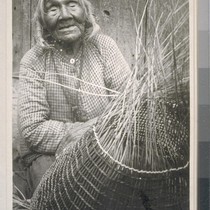 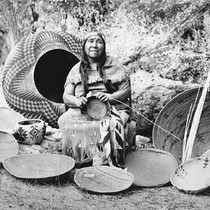 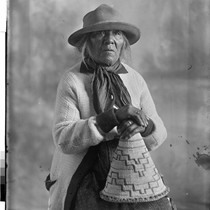 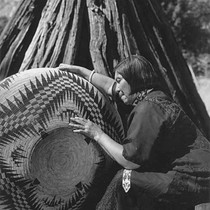 Lucy Telles and her largest basket 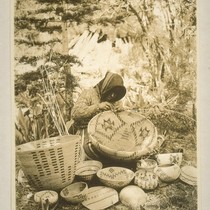 Diverse in culture and way of life, they lived in hundreds of small, politically autonomous communities up and down the state, connected by trade and kinship networks. Two maps show the general range of these tribes throughout the entire area. The map of Pomo linguistic stock shows many dialect variations and village sites, demonstrating the complexity of language variations in just one tribal group.

Most California native communities consisted of between 200 and 500 people. Boundaries were general. Nomadic groups tended to have greater social and gender equality, while more sedentary groups had hierarchical social classes with a wide gulf between rich and poor.

Although artwork by European artists depicts some aspects of California Indian life, we have no images from pre-Columbian California. The lithographs shown here, by Russian artist Ludwig Choris, were based on sketches he created during a visit to California in 1816 — long after their traditional way of life had been disrupted.

It is possible to get glimpses of their lives, but it is impossible to know how these tribes really looked and lived, as opposed to how they were viewed through European eyes. For example, because native groups usually altered the landscape in a way that mimicked nature, Europeans mistakenly assumed natives lived in an untouched "wilderness." But whether they lived in mountains, valleys, deserts, forests, or beaches, native peoples continually managed their environment, tending and cultivating the land through controlled burnings, weeding, pruning, tilling, irrigation, and selective replanting.

We do know that elaborate basketry was an integral component of Native Californian culture and subsistence. Baskets were both beautiful and functional. They varied greatly by shape and size based on their function, be it for gathering food, sifting acorn meal, storing tobacco, gambling, cooking, and even transporting water. Native Californians could weave so tightly that their baskets held boiling water — heated by hot rocks — without leaking.

Although the images shown here do not include baskets from pre-Columbian times, these traditional baskets suggest the wide range of shapes, patterns, and types of baskets made by native women. Two photographs taken in Yosemite National Park during the 1930s and 1940s show Lucy Telles, a famous basketmaker also known as Pa-ma-has (1885-1955). Telles was of Yosemite Miwok and Mono Lake Paiute descent. She often worked in the park, demonstrating native basket-making techniques for tourists. One photograph shows her working on her largest basket; the other shows her seated amidst 10 other baskets, possibly all made by her.

Few native artifacts from pre-Columbian California have persisted into the 21st century. No original images in this topic were created before the early 19th century.

"Native Americans: Pre-Columbian California to 18th Century" was curated and written by the University of California in 2005 as part of the California Cultures project.