The war in Europe had an enormous impact on American industry. Wartime factory work created new job opportunities, such as building battleships. The Kaiser shipyards in Richmond, California, produced the most warships in the country.
Read full overview|Go to first item 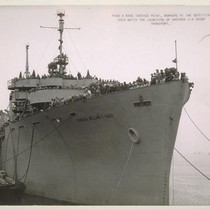 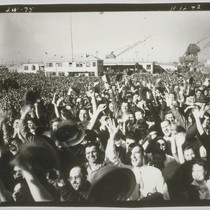 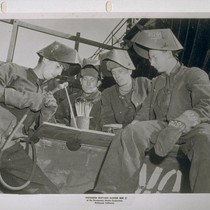 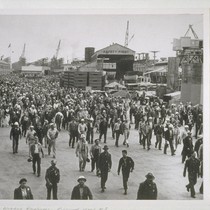 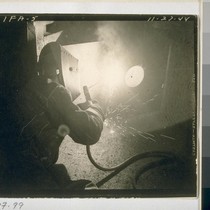 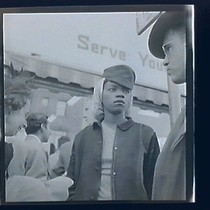 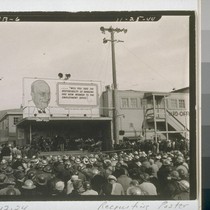 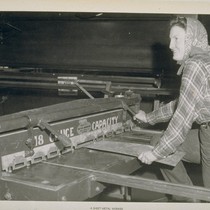 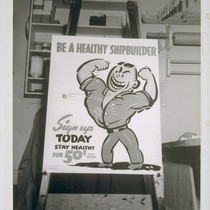 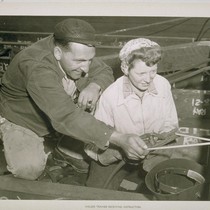 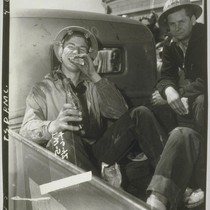 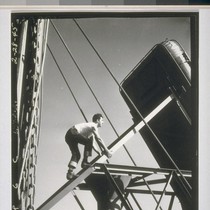 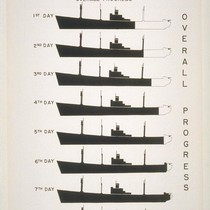 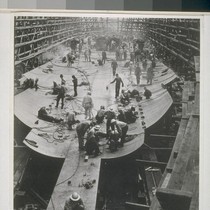 Unidentified workers, no date or yard 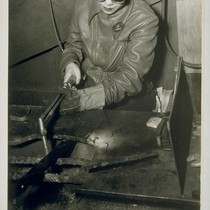 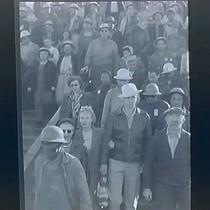 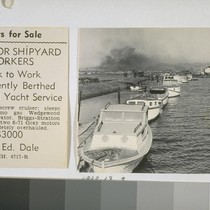 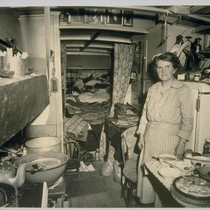 Interior view of outmoded bus, now home for a family of six. This shipyard worker's wife wants "a kitchen" 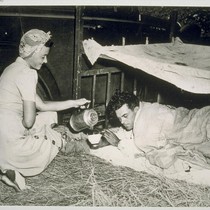 Said one mechanic, "I brought my tools along. If we're still without a house by the time winter comes, I'll show my wife how to make coffee and fry eggs in the car, using my blowtorch. But I'd rather not." 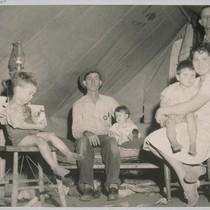 Both these excellent, intelligent workmen are employed in Richmond shipyards. "We brought our tent so's we could camp out on the way here; we didn't figure to have to live in it," they said. Between them, the men earn $100 weekly. "That's good money, but if we quit and go back home," the woman said, "it's only because of the kids. How can they keep clean in a place like this? Mister, when'll those houses be done?" 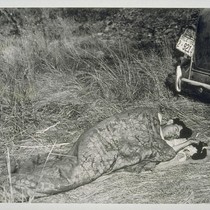 These men are not bums; they are skilled workers helping to build ships. Several hundred of them sleep outdoors for lack of rooms. These pictures were taken in August, when it never rains. "We deliberately choose to work the graveyard shift," they explain. "We get off at eight in the morning, have breakfast. By then it's warm enough to sleep most anywhere there's grass. Along toward evening we get up, shave in a filling station, and bum around town - in the bars, mostly; where else is there? - until time to go to work at midnight again." 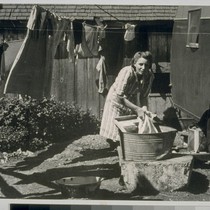 This woman, a refined and rather lovely grey-haired woman of two children and wife of a shipyard man, carries water for washing, has to dump waste water on the ground, because there are no sewers, uses a dirty outdoor privy kept that way by others - less fastidious. "We bathe in the washtub," she says. This family plans to stick it out, "because whenever we get to feeling sorry for ourselves, we think of what the soldiers are up against." But this viewpoint isn't too common
View all

The war in Europe had an enormous impact on American industry. Wartime factory work created new job opportunities, such as building battleships. These photographs, all taken in and around the Richmond Shipyards in Richmond, California, give a sense of what took place at shipyards during World War II.

Industrialist Henry J. Kaiser ran seven shipyards and employed thousands of people. He used an assembly line to build ships, assembling some in less than five days. One image in this collection shows a ship's hull under construction. Another shows a diagram with goals for completing a ship. The workers at the Kaiser shipyards in Richmond, California, produced the most warships in the country during World War II. One photograph shows workers celebrating the launch of one of their ships.

Kaiser was a forward thinker in terms of employee benefits. As the "Be a Healthy Shipbuilder" sign in one of the photographs shows, he was concerned about the welfare of his employees. Kaiser provided his employees with a health care plan by creating the first health maintenance organization, an HMO that exists to this day; and he set up on-site day care centers, where workers could leave their children while they worked their shift.

Several photographs show the masses of workers who came to work each day, and many show women and minorities working at the Richmond Shipyards. A shortage of male workers and the pressing need for labor (as evidenced by the image of the recruiting billboard), created these new opportunities. This need for workers contributed to the migration to California of African Americans, who came in great numbers from the South in search of job opportunities.

The many people who streamed into the shipyards in search of work turned Richmond into a boomtown, even attracting national attention. All of the workers needed a place to live, and makeshift living conditions were cramped and uncomfortable. One photograph shows the wife of worker standing in her home: a cramped bus that housed her family of six. Other photographs show families camping in tents and sleeping on the ground as they waited for housing to be built. Some shipyard workers resorted to living on boats, as you can see from the newspaper advertising "Boats for Sale."

A few of these photographs were taken by photographer Dorothea Lange, who collaborated with photographer Ansel Adams on a wartime photo assignment for Fortune magazine in 1944 focusing on the town of Richmond, California.

A few of the images in this exhibition--most notably, the photographs taken by Dorothea Lange--do not accurately represent the high quality of the original images. This is due to the technology available at the time they were scanned. We hope to have new versions of the photographs available soon.

"Richmond Shipyards" was curated and written by the University of California in 2005.