The Free Speech Movement (FSM) was a college campus phenomenon inspired first by the struggle for civil rights and later fueled by opposition to the Vietnam War.
Read full overview|Go to first item 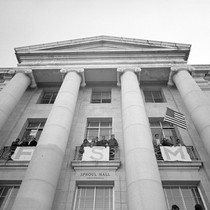 Sproul Hall with FSM signs hanging over the balconies. A student holds the American flag on the south balcony 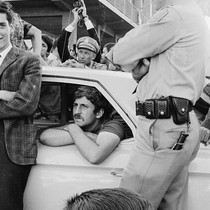 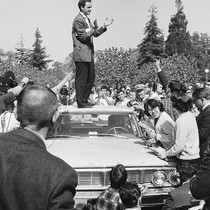 Mario Savio speaking from the top of the police car 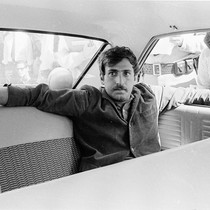 Jack Weinberg in the back seat of the police car 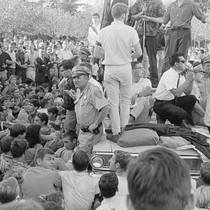 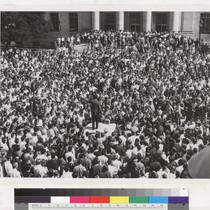 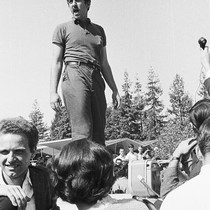 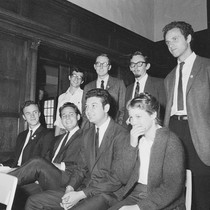 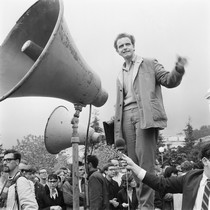 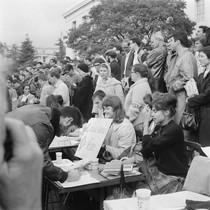 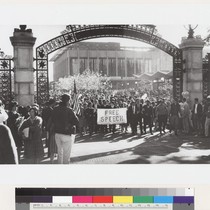 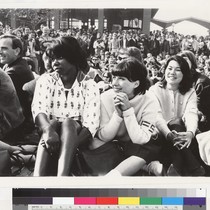 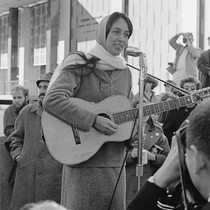 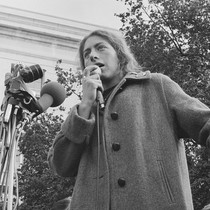 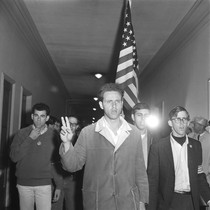 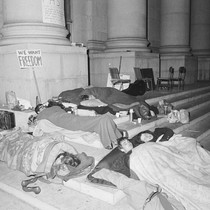 Demonstrators asleep on the steps of Sproul Hall during sit-in the night of Dec. 2nd 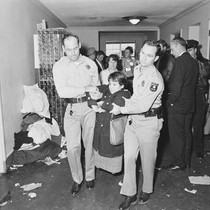 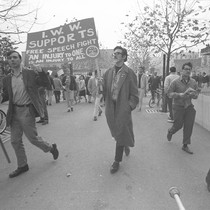 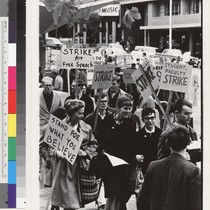 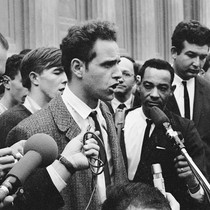 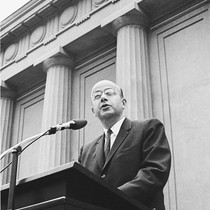 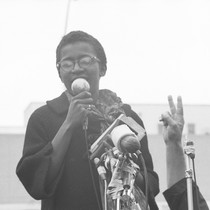 Woman speaking at CORE rally at Bancroft and Telegraph 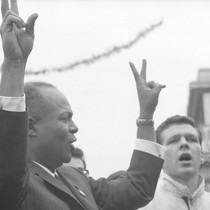 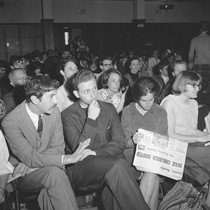 These images show UC Berkeley's Free Speech Movement as it happened. Photographs record the standoff and the aftermath.

The Free Speech Movement (FSM) was a college campus phenomenon inspired first by the struggle for civil rights and later fueled by opposition to the Vietnam War. The Free Speech Movement began in 1964, when students at the University of California, Berkeley protested a ban on on-campus political activities. The protest was led by several students, who also demanded their right to free speech and academic freedom. The FSM sparked an unprecedented wave of student activism and involvement.

Many images in this group make it clear that the center of the activity on the UC Berkeley campus was in Sproul Plaza. One photograph shows students occupying the balconies of Sproul Hall, a campus administration building, holding FSM banners and an American flag. Another photograph shows student leader Mario Savio leading a group of students through Sather Gate toward a meeting of the UC Regents.

In defiance of the ban on on-campus political activities, graduate student Jack Weinberg set up a table with political information and was arrested. But a group of approximately 3,000 students surrounded the police car in which he was held, preventing it from moving for 36 hours. Photographs show Weinberg in the car, both Mario Savio and Jack Weinberg on top of the surrounded car speaking to the crowd, and the car encircled by protesters and police.

Other photographs that portray key people and events of the Free Speech Movement include the eight students (including Mario Savio) suspended for operating a table on campus without a permit and raising money for unauthorized purposes; Mario Savio speaking to a crowd; students signing a pledge; and students sleeping on the steps of Sproul Plaza. Photographs of students being arrested, holding a mass sit-in, and picketing in support of the student-faculty strike as they protest demonstrators' arrests reflect other aspects of the Free Speech Movement.

Singer Joan Baez supported the FSM, and a photograph shows her singing to the demonstrators. Bettina Aptheker, who later became a professor of Feminist Studies at UC Santa Cruz, also supported the FSM. A photograph shows her speaking in front of Sproul Hall. Other photographs in this topic demonstrate that groups such as Congress of Racial Equality (CORE) and the International Workers of the World (IWW) showed solidarity and supported the FSM. Other images in this group include UC President Clark Kerr speaking at the UC Berkeley Greek Theater, and CORE co-founder James Farmer at a CORE rally.

"The Free Speech Movement" was curated and written by the University of California in 2005.