In the aftermath of the Watts Riots, photographs show police occupation, burned-out buildings, politicians, and a community looking toward a more hopeful future.
Read full overview|Go to first item 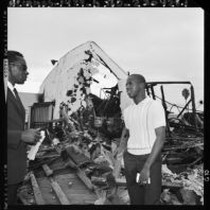 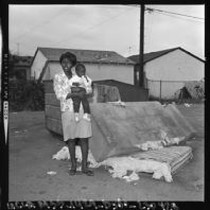 Woman and baby on sidewalk in Watts, Los Angeles (Calif.) 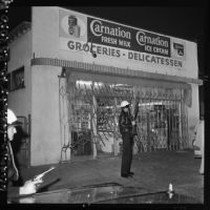 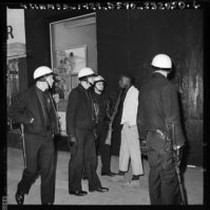 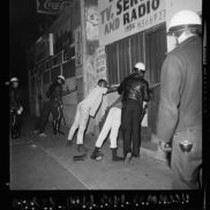 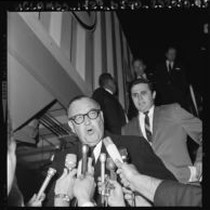 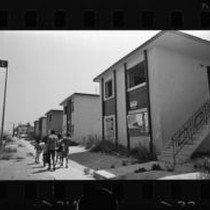 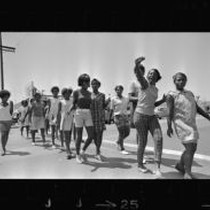 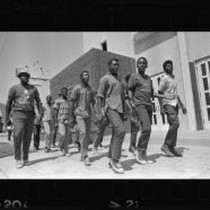 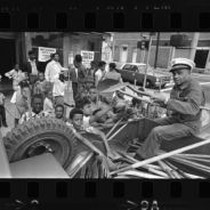 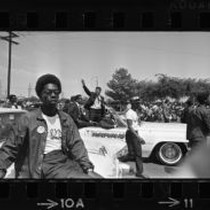 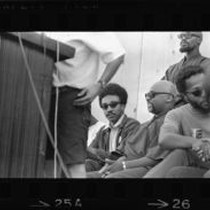 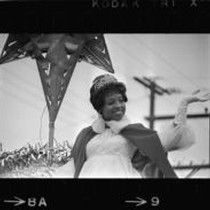 Queen of the Watts Chistmas Parade 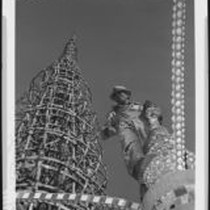 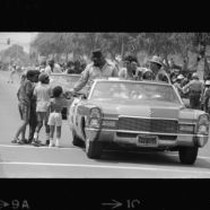 The images in this group depict the aftermath of the Watts Riots and the neighborhood's later efforts at renewal. Photographs taken over several years show the progression: police occupation, burned-out buildings, politicians, and a community looking toward a more hopeful future.

By the late 1960s, despite the ongoing Civil Rights movement, frustration over poverty, discrimination, injustice, and high unemployment among African Americans helped fuel unrest in many poor, black urban areas. On August 11, 1965, sparked by an angry confrontation between a white police officer and an African American motorcyclist, the Watts neighborhood in Los Angeles erupted in a large-scale civil disorder that lasted for six days and became known as the Watts Riots. Thirty-four people were reported killed, 4,000 were arrested, and 600 buildings were damaged or destroyed. Similar riots erupted in many American cities after Martin Luther King, Jr., was assassinated in April 1968.

Recovery from the riots was slow. Photographs taken two months later show a woman and her baby on the sidewalk, in front of rotting furniture; and a young man standing in front of a burned-out store near his home. Other photographs, taken seven months after the riots, reflect the racial tension that remained between police and residents after the riots — images of armed officers on patrol and officers frisking black suspects for weapons. And another photograph, taken two years later, shows people walking by a row of still-abandoned apartment buildings.

The riots got the attention of politicians. California Governor Pat Brown (1959−1967) and Los Angeles Mayor Sam Yorty are shown leaving a post-riot conference in March 1966. The people in the Watts community didn't wait for the politicians; they made great efforts at renewal after the riots. Two photographs portray African American girls and boys walking to their summer jobs in Watts. Another image depicts a man handing out shovels and street cleaning supplies to boys ready to help in a clean-up drive.

The Watts community also attempted to reinvigorate its neighborhood by holding parades and local celebrations. In one image, the Queen of the Watts Christmas Parade waves to the crowd; in another, Roosevelt Grier, a popular professional football player for the Los Angeles Rams, shakes hands with children at the Watts Summer Festival. And boxer Muhammad Ali leads the Watts Summer Festival in an open convertible. Other important local figures shown here include activist Ron Karenga, (now Dr. Maulana Karenga, the founder of the holiday Kwanzaa); and Italian American artist Simon Rodia, with his famous “outsider” sculpture known as the Watts Towers, which is still a central attraction in Watts today.

"The Watts Rebellion" was curated and written by the University of California in 2005.