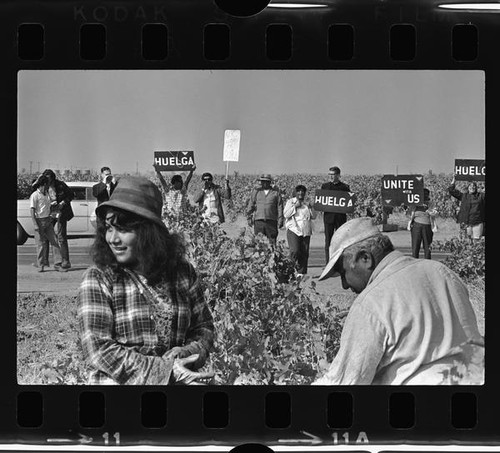 The 1960s and early 1970s were characterized by a series of protests as groups that had long felt disempowered sought to make their voices heard. California was the heart of many of these new movements.
Read full overview|Go to first item 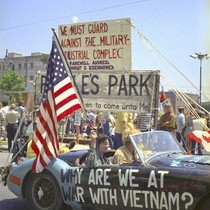 Car and flag in front of People's park says "Why are we at war with Vietnam?" 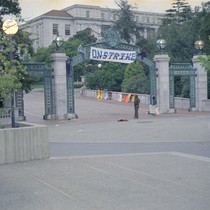 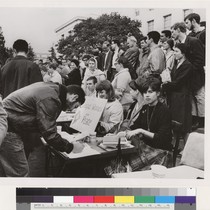 Rally at Sproul Hall, with "Campus Women for Peace" table in foreground 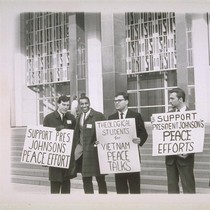 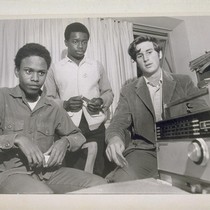 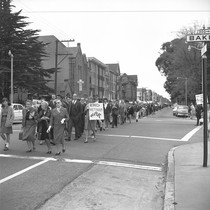 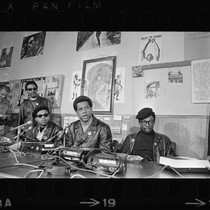 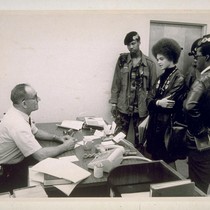 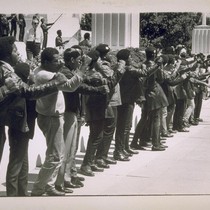 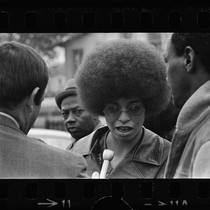 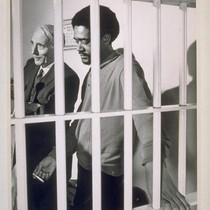 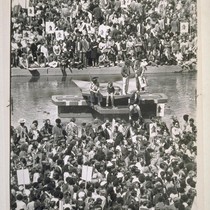 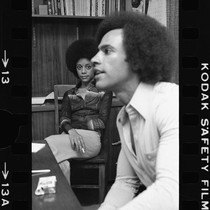 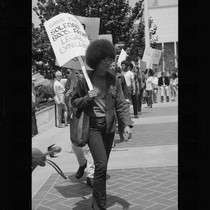 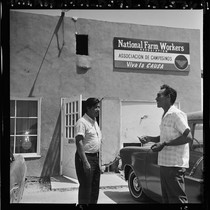 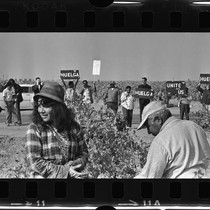 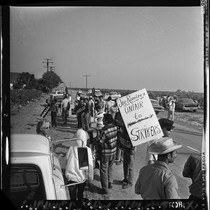 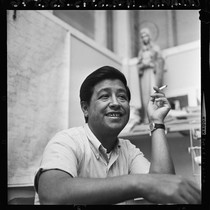 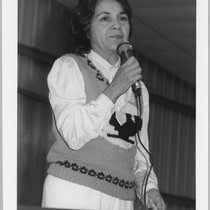 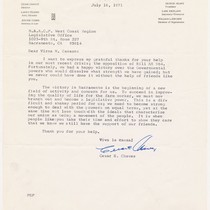 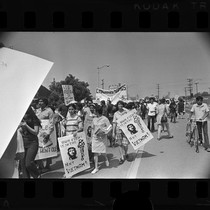 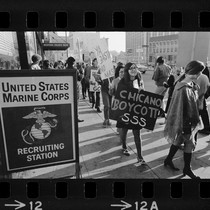 These images show how a range of groups during the 1960s and 70s chose to voice their frustration with the status quo by staging protests and making their voices heard. Photographs also show the leaders of such groups as the United Farm Workers and the Black Panthers.

The 1960s and early 1970s were characterized by a series of protests as groups that had long felt disempowered sought to make their voices heard. California was the heart of many of these new movements. The protests put into motion by the Civil Rights movement evolved to address social justice issues affecting many groups, including students facing the draft, ordinary people protesting the war, farm workers fighting for better working conditions, Chicanos expressing a new identity, and African Americans who felt that nonviolence as a tactic was no longer working.

America's continued involvement in the Vietnam War galvanized many groups. Across the United States, students protested US involvement in the war by resisting the draft. All sorts of people joined in by disrupting "business as usual," marching, and going on strike. One photograph shows a banner declaring "On Strike" hanging over UC Berkeley's Sather Gate; the deserted campus demonstrates widespread support among both faculty and students. Other photographs depict students marching in protest against the war, signing a "Women for Peace" petition, and waving an American flag in an anti-war parade.

The Chicano Moratorium Committee protested the war by marching in parades, but they also registered their own social justice agenda: one photograph shows them carrying banners that read, "Our fight is in the barrio, not Vietnam."

People also rallied around workers' rights, pushing boundaries and demanding better working conditions. The United Farm Workers (UFW), co-founded and led by Cesar Chavez, used strikes to protest the unfair treatment that California's mainly Mexican field workers received. In one photograph pickets stand at the edge of a Central California grape field and carry placards that say "Huelga," Spanish for "strike." Another photograph shows UFW co-founder Dolores Huerta addressing a group. Groups demanding their rights did not work in isolation; a 1971 letter from Cesar Chavez to the NAACP reflects the support that existed between the two groups, both of which were fighting for equal treatment under the law.

The Oakland, California-based Black Nationalist organization, the Black Panther Party, was fighting for social justice on several fronts, in a way that often confused their more moderate supporters. They strongly promoted important and positive social issues such as free clinics, programs to feed children, and drug rehabilitation programs; yet, at the same time, they embraced controversial and at times violent tactics. Although Panthers were involved in violent clashes with police, it is still unclear whether the Panthers initiated these actions or were simply defending themselves against police violence directed at them.

Many of the Panther leaders were persuasive and charismatic speakers, and photographs here show many of them in action: Black Panther Minister of Defense Huey Newton and his wife, Gwen; Black Panther Chairman Bobby Seale in jail; members of the Black Panthers at a press conference; Kathleen Cleaver in a prosecutor's office; and Angela Davis in Los Angeles speaking to the press after a Black Panther shootout. When Huey Newton was put on trial in 1968, accused of murdering a police officer, Black Panthers lined up on the second day of trial to show their support. Another image shows a multiracial crowd gathered at a Huey Newton rally in 1969 at San Francisco's Federal Building.

"Struggles for Social Justice" was curated and written by the University of California in 2005.