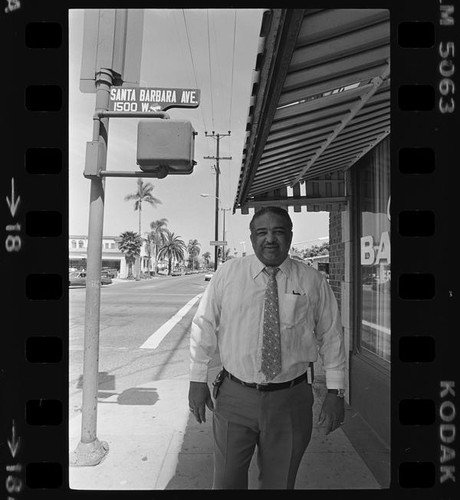 In the early 1970s, the ideals the Black Panthers had fought for were taking hold in the community. African Americans continued to press for social change.
Read full overview|Go to first item 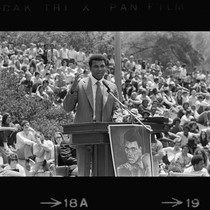 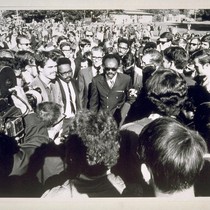 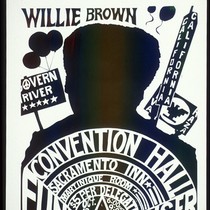 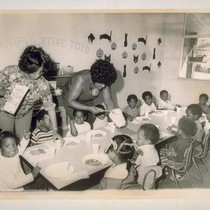 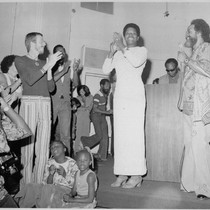 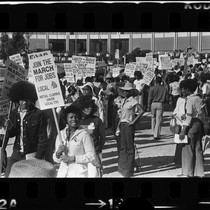 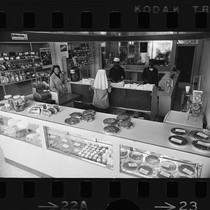 Interior view of a Muslim market in Los Angeles (Calif.) 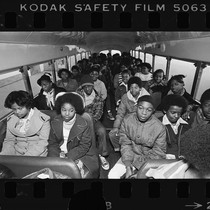 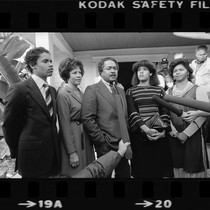 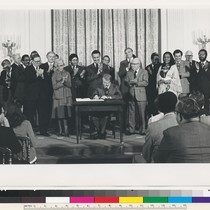 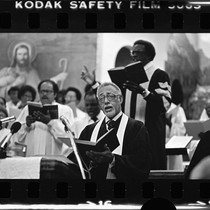 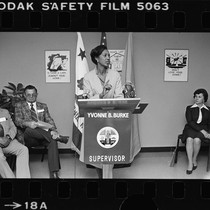 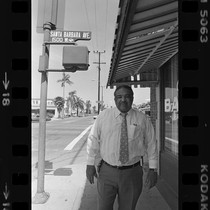 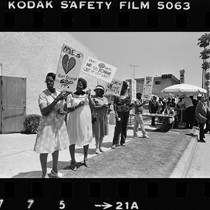 The murder trials finally took their toll. By the early 1970s the Panthers had lost momentum, and so had their call for revolution. A 1971 photograph shows Muhammad Ali speaking to UCLA students about a broader range of topics: boxing, alcohol, narcotics, and his Black Muslim faith, in addition to the Black Panthers.

Meanwhile, the ideals the Panthers had fought for were taking hold in the community. African American politicians like California State Assemblyman Willie Brown (shown surrounded by students) were elected and reelected to public office. In 1978, Mervyn Dymally was the Lieutenant Governor of California. The voices of black artists like poet and author Maya Angelou were being heard. And African American entrepreneurs were operating businesses from day care centers to markets.

Building on this platform of progress, African Americans in the late 1970s pressed for more social change. A 1977 photograph shows a march for jobs and housing in Los Angeles on Martin Luther King Day, one of a number of similar marches across the country. In 1978, President Jimmy Carter signed the Humphrey Hawkins Bill, aimed at providing "full employment" for everyone.

By the 1980s, Martin Luther King, Jr., had become a historic figure and a hero. Across the nation, the names of streets — like Santa Barbara Avenue in Los Angeles — were changed to honor him. The man shown in the photograph, Celes King III, was himself an American hero: the founder of Congress for Racial Equality of California (CORE-CA), longtime president of the Los Angeles branch of the NAACP, and a pilot in the famous all-Negro Tuskegee Airman Squadron during World War II.

At the same time, crime was becoming an issue in the African American community. Photographs show Los Angeles County Supervisor Yvonne Braithwaite Burke speaking against fraud to a homeowner's association; and another photograph, taken in 1983, shows residents in South Central Los Angeles demonstrating against crime in their neighborhood.

In 1992, violence erupted in South Central after the acquittal of several white police officers for the beating of black motorist Rodney King. Millions of dollars of damage were done and the lives of many residents were affected. The "Rodney King uprising" has also been called the first multiethnic riot because it included Hispanic Americans and Korean Americans as well as African Americans. Many choose to call these events a "rebellion" against social and economic conditions in the inner city, rather than a "riot," which only emphasizes the violence. This reoccurrence of urban violence surprised many who believed the Civil Rights movement had improved conditions for California's African Americans. Some have noted that although political gains had been made over the years, continuing economic inequalities contributed to escalating tension. The underlying causes of the Watts uprising — underemployment, poverty, segregation, and police harassment — persisted almost 30 years later.

Today, upwardly mobile African Americans have moved from the urban centers of Los Angeles, Oakland, and San Francisco into suburbs and the Central Valley and their ability to work together to elect local black politicians has actually weakened. As their voting bloc has dispersed, Asian Americans and Hispanic Americans have grown in numbers and their political power in the state is rising.

"African Americans: Politics and Community, 1970s-Present" was curated and written by the University of California in 2005 as part of the California Cultures project.