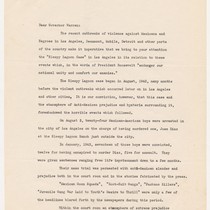 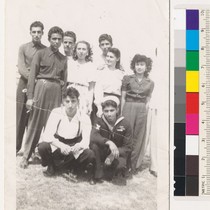 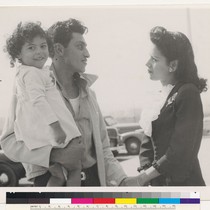 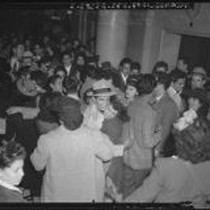 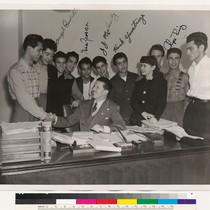 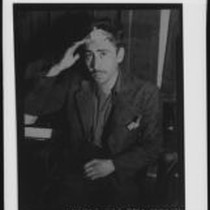 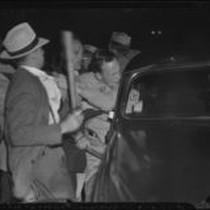 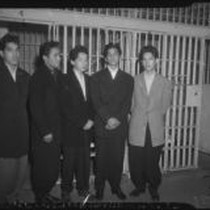 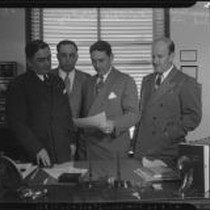 The first occurred in January 1943, when 17 Mexican American youths were convicted of murdering a boy whose body had been found in a reservoir known as Sleepy Lagoon. Alice McGrath (who led appeal for defendants in Sleepy Lagoon case) and the Sleepy Lagoon defendants are shown in Chino in 1944.

The racist bias of the judge and prosecution was so blatant that the Sleepy Lagoon case attracted the sympathy of people around the country. Shown here is a six-page letter written to Governor Earl Warren, pleading for his intervention. Eventually, the case was overturned by an appellate court, and the acquittal was cause for celebration in the community (as shown in this courtroom scene).

The second incident erupted in June 1943, when long-simmering tensions between white servicemen and Mexican American “zoot suiters” turned into a week-long race riot. "Zoot suits" — high-waisted trousers with wide pegged legs, worn with long coats — were popular with Mexicans Americans, African Americans, and Filipino Americans during the early 1940s. (The young men detained for questioning after a brawl are wearing zoot suits.)

During the riot, mobs of white sailors, soldiers, and marines assaulted Mexican American teenagers and tore off their clothes. One photograph shows a man wielding a baseball bat during the melee. Local newspapers, however, portrayed the boys as the aggressors. Even the name of the incident — the Zoot Suit Riots — placed the blame on Mexican Americans.

"Hispanic Americans: Racial Tensions During World War II" was curated and written by the University of California in 2005 as part of the California Cultures project.