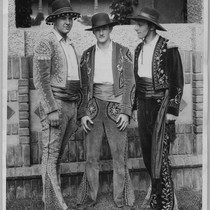 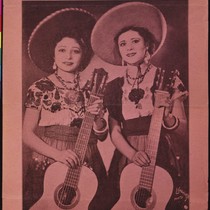 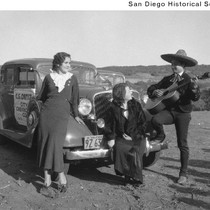 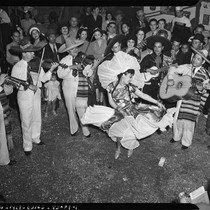 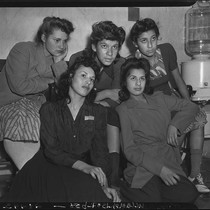 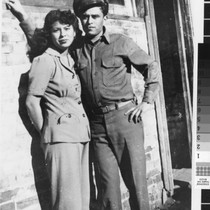 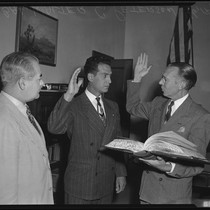 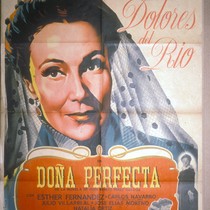 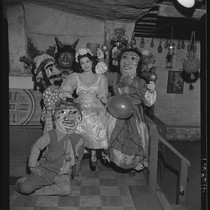 Costumes for a fiesta on Olvera Street, Los Angeles (Calif.) 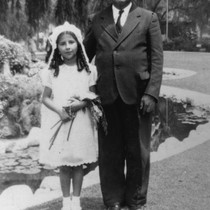 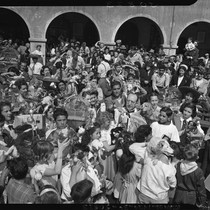 Blessing of the animals on Olvera Street, Los Angeles (Calif.) 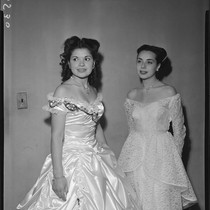 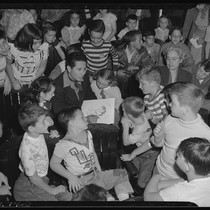 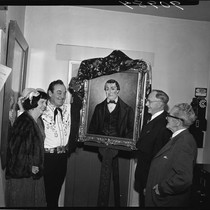 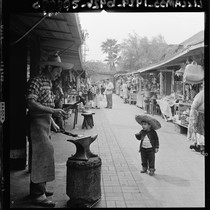 With the migrant labor surge of the 1930s and 1940s, Mexicans soon made up the bulk of the labor force in many unskilled and semi-skilled industries, including agriculture, railroads, manufacturing, and domestic service. They soon began to forge identities as Mexican Americans, transforming traditions to create something new.

Some traditions were carried in music, and a flier from around 1935 promotes a Mexican American Dance at San Jose Municipal Auditorium with a singing sister act. A photograph from around the same time (perhaps an ad for a car dealer) shows two women sitting on a car and being serenaded by a Mexican singer with a guitar. By the 1940s, the Mexican holiday Cinco de Mayo was being celebrated in Mexican American communities, as shown in the photograph of one such celebration in Los Angeles.

In a photograph from 1948, actress Anita Aros (center) poses with other costumed actors as they prepare for a fiesta on Olvera Street, a tourist-oriented street in downtown Los Angeles that was also the site for the photograph of the "blessing of the animals." Olvera Street romanticized Mexican American life, but was also the site of historic buildings, such as the Avila Adobe.

"Traditional" outfits like those worn by Mexican cowboys from the Fiesta des Rosas in Santa Clara, and the souvenirs sold on Olvera Street, eventually became cliché. But Mexican American life continued to evolve. In many ways, their lives were a reflection of American life. Oxnard's Dolores Tejeda won the title "La Reina del Churubusco IX," Queen of Beauty of the Southland's Latin-American colony, in 1948. The same year, carrying on strong religious traditions in the Mexican American community, a little girl named Rose Veyna celebrated her first communion, in Anaheim. On a more somber note, a group of young women are identified in a 1942 photograph as a "Mexican American female gang."

Although many migrant workers came to California during World War II, some Mexican Americans — like George Valdez (shown with his wife) — joined the armed services. And In 1946, Ed Roybal, shown here, was sworn in as the first Mexican American LA city councilman, representing the multiethnic (Mexican, African American, Jewish, and Japanese American) neighborhood of Boyle Heights.

Dolores del Rio, a famous Mexican actress, moved to Hollywood during the silent film era. Actor Leo Carillo, who became famous playing the stereotypical Pancho, sidekick to Duncan Reynaldo's Cisco Kid, was descended from an old Californio family. He later became a respected preservationist and conservationist, and Leo Carillo State Park near Malibu was named for him. Cartoonist Gus Arriola created the beautifully drawn comic strip Gordo, an award-winning series that presenting Mexicans, and their folklore and history, with respect.

"Hispanic Americans: Cultural Traditions and the People, 1930s-1960s" was curated and written by the University of California in 2005 as part of the California Cultures project.