Currently one of the largest and most well known LBGT events in the world, in the late 1970s the parade took on its identity as a potent symbol of LGBT politics and culture.
Read full overview|Go to first item 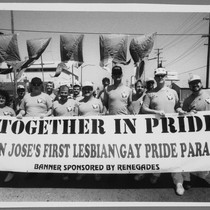 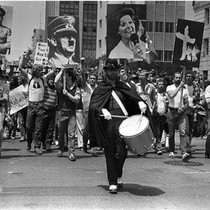 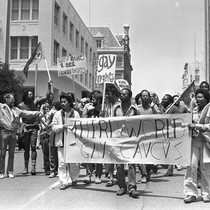 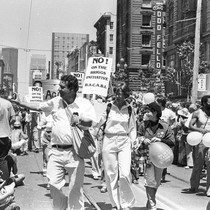 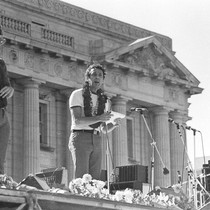 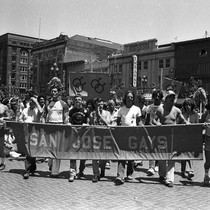 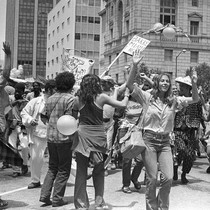 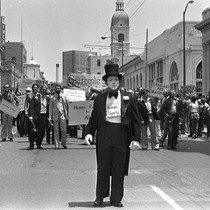 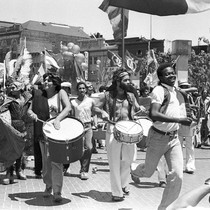 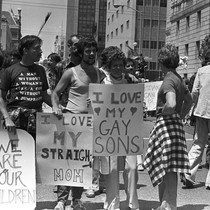 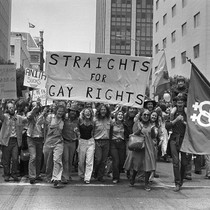 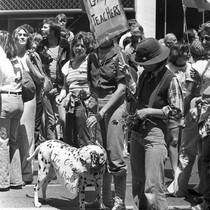 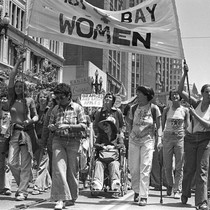 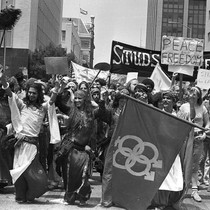 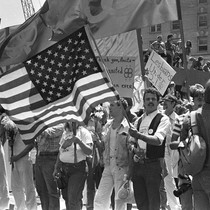 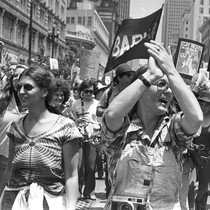 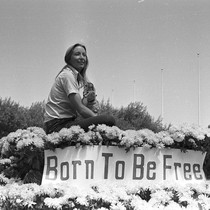 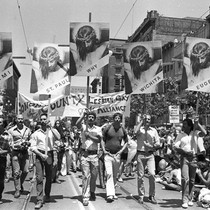 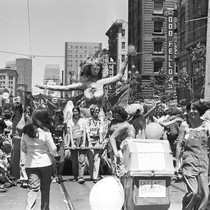 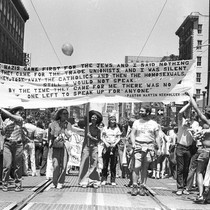 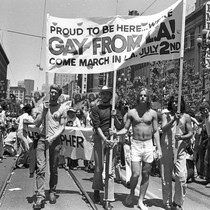 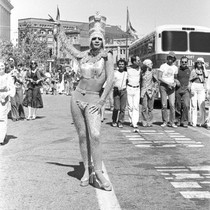 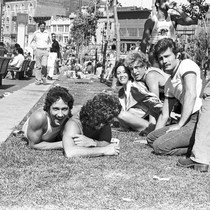 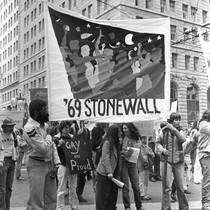 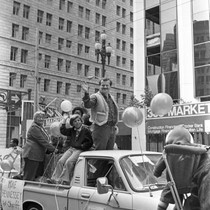 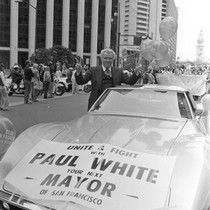 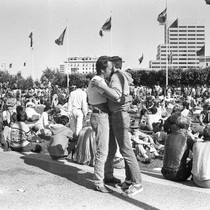 These images depict San Francisco’s lesbian, gay, bisexual, and transgender (LGBT) pride parades in 1977 and 1978. Currently one of the largest and most well known LBGT events in the world, in these years the parade took on its identity as a potent symbol of LGBT politics and culture.

The San Francisco pride parade grew out of decades of work to mobilize for LGBT rights. In the 1950s, people throughout the country hid their LGBT identities for fear of being fired from jobs, disowned by their families, or arrested. While early "homophile" organizations advocated for gay and lesbian rights, they did so quietly.

In the 1960s, the advances of the black civil rights movement encouraged racial minorities, women, and LGBT people to create more visible, powerful movements for equality. On June 28, 1969, patrons of the Stonewall Inn--an LGBT bar in New York City--rioted for several days following a police raid. Homophile organizers in New York seized on this activity by planning nationally coordinated parades to commemorate the riot and advance a more visible LGBT rights movement.

Influenced by the women's movement maxim that “the personal is political,” LGBT activists increasingly argued that “coming out of the closet” by publicly declaring one’s sexual or gender identity was an important political act. Pride parades, in which participants took to the streets as a politicized LGBT community, were visual representations of this new political consciousness. Many cities in California and across the nation organized their own parades. For example, this photograph depicts people marching in San Jose’s first lesbian/gay pride parade in 1974.

But by the late 1970s, San Francisco’s pride parade had become the country’s largest and most significant. In 1977 and 1978, when the photographs in this topic were taken, the parade had about 250,000 participants, making it the largest annual procession in the city. San Francisco had long been known as a mecca for LGBT people from across the country. In June 1964, America’s largest-circulation family magazine, Life, proclaimed it the nation’s “gay capital.” LGBT organizers in the 1960s and early 1970s had made significant gains in improving police relations, forming a strong gay business district, and enacting LGBT rights ordinances there.

The parade also grew in response to nationwide repeals of LGBT rights ordinances that prohibited discrimination on the basis of sexual orientation. Most significantly, in 1977, pop singer and Florida citrus industry spokesperson Anita Bryant formed a coalition to successfully repeal a LGBT rights ordinance in Dade County, Florida. As this photograph shows, marchers in that year’s parade expressed their outrage at the repeal by holding a photo of Bryant along with Joseph Stalin, Adolf Hitler, and a burning cross.

Encouraged by Bryant’s campaign, the next year, voters in St. Paul, Minnesota; Wichita, Kansas; and Eugene, Oregon also overturned gay rights ordinances. This photo from the 1978 parade shows marchers holding signs with the names of these cities emblazoned over images of Jesus Christ, signifying their feelings of martyrdom and persecution. Another image shows marchers holding signs that denounced the Briggs initiative. The day after the Dade County vote, John Briggs—state senator from Orange County, California—announced plans to introduce legislation to prohibit gays from teaching in public schools. Voters ultimately defeated the initiative in November 1978.

The images in this exhibition show that diverse groups came together to march in the parades. Among the groups photographed included San Jose Gays, Third World Gay Caucus, Straights for Gay Rights, the Peace and Freedom Party, and Lesbians Under 21. Creating a unified LGBT movement was not without its challenges. In 1977, women formed a separate contingent at the front of the parade in response to what they perceived to be the misogyny of parade organizers. Parade participants often debated the appropriateness of drag performance, sexual expression, and racial and gender politics.

Pride parades were also created to show the organized LGBT voting bloc and advance LGBT rights. As the photos reflect, politicians postured for votes from the LGBT community in these parades. By this time, organizers had made significant inroads into the city’s political establishment: in 1977, Mayor George Moscone penned the first letter of support for the parade from a San Francisco mayor, and in 1978, the parade won City funding for the first time. In 1977, Harvey Milk became the first openly gay man to be elected to public office in California. This photograph shows him speaking to marchers in 1978, as the city’s first openly gay supervisor.

But the LGBT community’s growing political power promoted a backlash against it. Just a few months after the parade, on November 27, 1978, Harvey Milk and Mayor George Moscone were assassinated by former Supervisor Dan White. The assassination would galvanize San Franciscans, and the pride parade would continue to grow. Today, it is estimated at over a million participants each year, and additional pride parades are organized around the world. The rainbow flag, which was originally created for the 1978 pride parade, now flies over Harvey Milk Plaza in San Francisco’s Castro neighborhood, arguably the best known gay neighborhood in the world. The flag and neighborhood continue to be symbols of inclusion and advocacy for the rights of LGBT people everywhere.

"The LGBT Pride Parade" was curated and written by Joey Plaster, in collaboration with staff at the Gay, Lesbian, Bisexual, Transgender Historical Society and the University of California, in 2011.