Civic architecture embodies the way a community wants others to see it. The images in this exhibition show missions, courthouses, and other buildings from cities throughout California.
Read full overview|Go to first item 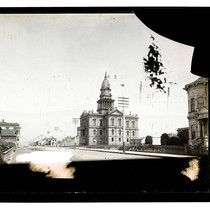 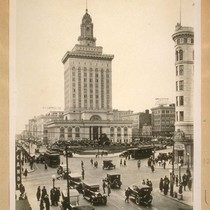 Oakland's new City Hall from 14th and Broadway in 1926 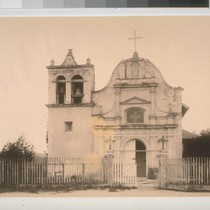 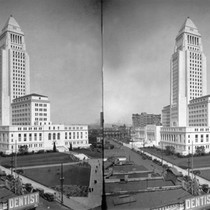 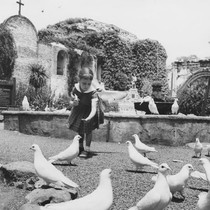 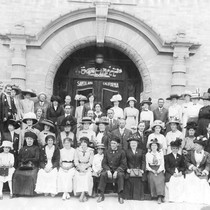 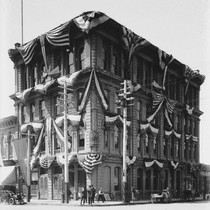 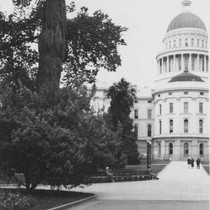 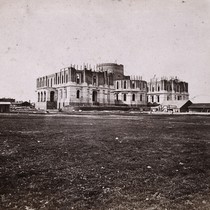 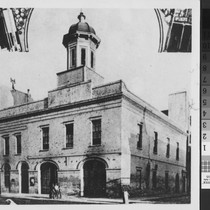 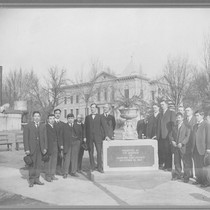 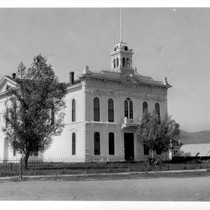 These images of civic architecture are from cities throughout California. They include missions, courthouses, city halls, and the state capitol building — important sites for city development and management. These buildings connect towns and cities to the state, and provide places for community members to seek legal redress, submit building plans, apply for permits, and engage in local government.

Civic architecture — from missions to skyscrapers — embodies the way a community wants others to see it. These buildings were designed to broadcast their institutional importance to the city. They were built to endure, providing a legacy to the area’s growth and development.

The Spanish mission system provided the institutional framework for Spanish colonization and California’s early settlement. Missions like this one in Monterey became focal points of the area’s development, central to community identity and activity.

Many missions have fallen into disrepair, but several — including Mission San Juan Capistrano — remain as living symbols that provide physical ties to a community’s history.

In order to become a state, California had to show that it had the capability of legally upholding the nation’s laws, moving away from its earlier reputation for “murder and mayhem.” Building and maintaining institutions showed eastern lawmakers that California was ready to be part of a modern, civilized nation.

So, in the mid-1800s, counties throughout the state wanted to symbolize law and order. They built impressive courthouses in places as far north as Eureka.

The Mono County courthouse was constructed in 1880 in Bridgeport with the immense wealth generated from the gold finds in Bodie. It is still in use today.

Courthouses were also vital sites of community membership. This 1915 image shows Japanese citizens of Hanford dedicating a fountain in front of the Kings County courthouse.

City halls, like this one in Marysville, housed many of the institutions necessary to run city government and were generally large, impressive structures. Like Santa Ana’s city hall, shown here with an early group of tourists, they were important civic gathering places for city clubs and groups. San Diego's City Hall displayed its patriotism with American flags and bunting.

Most notable is the construction of the State Capitol building in Sacramento. Using classical architectural components and modeled after the Capitol building in Washington, D.C., the impressive dome is still a reminder of the importance of government to the state. The building took nearly 15 years to complete, as you can see from this image of an early phase of its construction. It still houses California’s state government and serves as the central battleground of the state’s politics.

Looking to the Future

The early 20th century was an era of great change, new technologies, and increased professionalization. Larger and more vertical structures were built to house the growing number of institutions needed to successfully run California’s growing cities.

Oakland’s new city hall was completed in 1914, after the previous building was destroyed in the 1906 earthquake. At nearly 320 feet, it was the first high-rise government building in the United States. It was also the tallest building west of the Mississippi when it was completed. In the wake of disaster, much of the Bay Area rebuilt itself using modern architecture, staking California’s claim as a center of 20th century innovation.

The 1928 Los Angeles City Hall is another example of modern architecture. With 32 floors, and at 454 feet high, it was huge for its time, and is still in use today.

The longevity of these institutions can be attributed to their modern construction and design, and their importance to a community’s image. Los Angeles City Hall is consciously symbolic; among other features, its concrete was composed of sand from all of California’s 58 counties and water from 21 missions. The building is an iconic emblem of city government, and its image has been on city police badges since 1940. And as recently as 1964, it was still the city’s tallest building.

"Civic Buildings in California History" was curated and written by Julia Brashares and Kara O'Keefe Fos, in collaboration with staff at the University of California, in 2011.