From the mid-19th to early 20th centuries, earthquakes, floods, fire, disease, and other catastrophes shaped and re-shaped California’s natural environment and the new towns and cities growing up across the state.
Read full overview|Go to first item 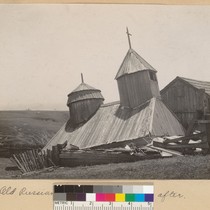 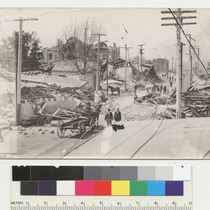 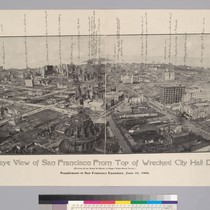 Birdseye view of San Francisco from top of wrecked City Hall dome. (Picture of the dome is shown in upper right-hand corner.) Supplement to the San Francisco Examiner, June 10, 1906 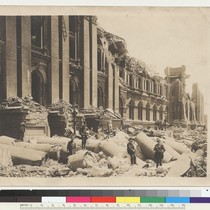 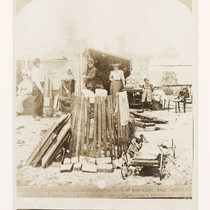 Dwellings of the homeless--shelter built of wreckage, near ruined City Hall, San Francisco, Cal. [No. 8198.] 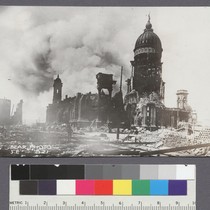 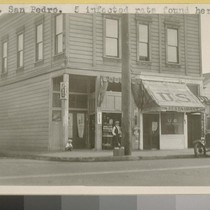 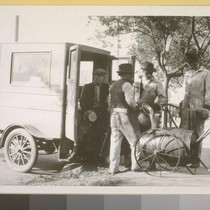 Disinfecting crew at work at E. 6th St. and Imperial 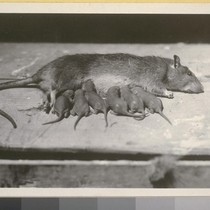 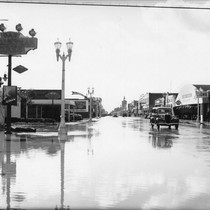 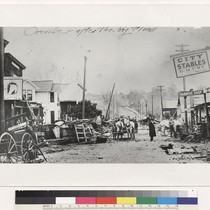 Oroville After the Big Flood 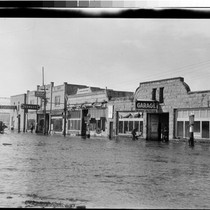 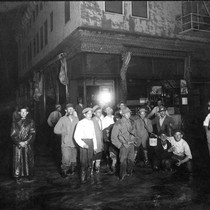 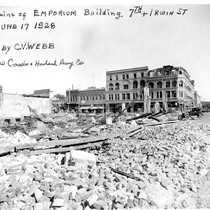 Remains of Emporium Building at 7th and Irwin in Hanford 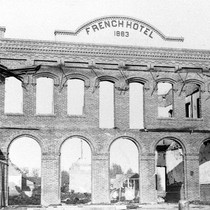 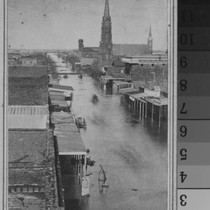 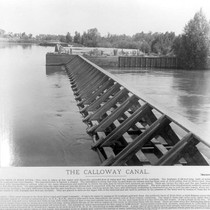 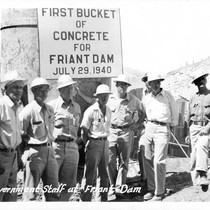 Before European and American development, Native Californian groups altered the landscape purposefully to preserve it, and avoided areas they knew to be dangerous. But by the mid-1800s, the Gold Rush brought a population boom.

These newcomers naturally built new towns and cities around bays, harbors, rivers, mountains, and fertile valleys. But because they didn’t know the landscape’s history, some communities were built on top of potentially dangerous environmental factors, such as flood plains and unseen earthquake faults.

From the mid-19th to early 20th centuries, earthquakes, floods, fire, disease, and other catastrophes shaped and re-shaped California’s natural environment and the new towns and cities growing up across the state. These images document both natural and human-caused disasters across California during the era, especially the destruction to property and peoples’ lives following fires, floods, and earthquakes.

Fresh water — in groundwater, rivers, and lakes — is one of California’s most prized natural resources. But controlling and managing water for drinking and irrigation has not been easy.

Images of Oroville and Alturas in the Shasta Cascade region show the devastating effects of heavy rain and extensive flooding in the town areas. Flood images from Marysville, in the Gold Country, show the streets filled with flood water.

Cities like Anaheim in Southern California experienced major flooding and immense population growth. A building boom resulted in the cementing over of natural watersheds, which increased the potential for flooding.

The city of Los Angeles, now with a population of over 9 million people, was built in an arid desert. This meant diverting billions of gallons of water for drinking and agriculture from other sources around the state and building numerous dams and power plants.

California’s thousands of fault lines make cities throughout the state vulnerable. Because earthquakes reverberate far beyond the epicenter, widespread damage can result.

The 1906 San Francisco earthquake was felt throughout the greater Bay Area. The Old Russian Church at Fort Ross, some 90 miles north of San Francisco, was damaged. Parts of Santa Rosa, some 55 miles northeast of the city, were in ruins.

The devastation in San Francisco itself was significant. The city appears nearly flattened in this bird’s-eye view. The once impressive pillars of City Hall crumbled to the streets, blocking roadways and creating safety hazards.

Fires, like the one that left the Central Valley’s Kutner-Goldstein department store in ruins in 1928, can change the landscape. The devastating fires that followed the 1906 quake in San Francisco restructured the city. The fire killed 3,000 people, destroyed much of the city, and left 225,000 people homeless. Although many stayed to rebuild, some — including Chinatown residents and many African Americans — relocated to Oakland, reshaping that city’s demographics. Others fled to Los Angeles in search of food, clean water, and the supplies needed to rebuild their lives.

Uncontrolled waste and vermin in dumps, in the streets, and in cramped living spaces contributed to disasters in densely populated towns and cities. In Los Angeles in 1924, pneumonic plague carried by rats spread quickly.

The city established disinfecting crews to eradicate any potential infected rat and squirrel populations, and destroyed rundown buildings considered potentials for disease. Suspect buildings and people were quarantined for weeks.

Some quarantined neighborhoods were home to Mexican immigrants. This led to reframing dialogue about the disease in racial terms. The movement toward containing disease became about quarantining certain neighborhoods perceived as a “public menace.”

Surprisingly, most disaster survivors — whether displaced by flood, fire, or earthquake — did not leave or move to safer ground. Instead, people worked to rebuild and reshape their cities in the same place. They used newer and better building materials and techniques, hoping to create sturdier structures that would withstand another natural disaster.

For example, In San Francisco, the earthquake brought down brick buildings and the fire burned the wooden ones. The city was rebuilt with more expensive but theoretically safer reinforced concrete, which allowed for taller, more modern, and more stable structures, changing the city’s skyline. Although natural disasters continue to threaten California’s cities and towns, its people continue to find new ways to reinvent and work with their existing environment.

"Disasters in California History" was curated and written by Julia Brashares and Kara O'Keefe Fos, in collaboration with staff at the University of California, in 2011.